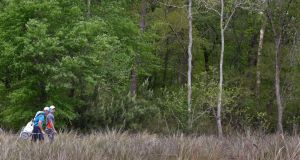 Rory McIlroy at the Shell Houston Open. McIlroy finished his round on two-under, one behind Harrington and five off the overall lead.

Three-time major winner Padraig Harrington was left to rue missed opportunities despite keeping his faint hopes of qualifying for next week’s US Masters alive.

Harrington has to win the Shell Houston Open to avoid missing out on a trip to Augusta for the first time since 1999 and got off to an encouraging start with an opening 69 at the Golf Club of Houston.

The 42-year-old Dubliner started on the 10th and holed from eight feet for an opening birdie before picking up another shot on the par-five 13th.

Harrington dropped a shot on the next after failing to get up and down from a greenside bunker but quickly made amends with birdies on the 17th and 18th to reach the turn in 33.

A three-putt bogey on the third halted the former Ryder Cup star’s momentum, but birdies on the fourth and sixth had him high on the leaderboard before a disappointing bogey on the ninth, his final hole.

“The round itself was okay but I should have scored better as I had birdie chances at nearly every hole and felt I should have finished six or seven under,” Harrington told www.golfbytourmiss.com

“Everyone has been making out this is a big week for me but then the past few weeks have been big weeks for me. Yes, there is a bit of an inevitability about this week but that’s all that changed.

“But while I know it is my last chance to get into the Masters I am not trying to do anything different, and it’s not like I have a secret for good golf to keep for a week like this.

“A three under par start is always okay but what I am ruing is that it could have been easily six or seven under par and I would be in a better position going forward.”

At three under par, Harrington — whose last victory on a major tour came in the 2008 US PGA Championship — was four shots behind leaders Charley Hoffmann and Bill Haas, Haas playing his last six holes in five under par with an eagle and three birdies.

Former US PGA champion Keegan Bradley was among a large group a shot behind on six under, while Bradley’s playing partners Webb Simpson and Phil Mickelson were also off to a good start. The pair returned flawless rounds of 68 which meant the group were a combined 14 under par without a single bogey between them.

British Open champion Mickelson had been a doubt for the event with a pulled muscle which forced him out of the Valero Texas Open last week, but the left-hander showed no ill effects.

Mickelson believes receiving treatment within 30 minutes of his withdrawal could have proved vital, adding: “I travel with a light therapy machine, and I got on it right away.

“I think that made a world of difference as far as expediting the healing process to where it doesn’t hurt any more. It just feels sore like I was working out, as opposed to kind of a painful experience.

“I’m surprised because I was worried when it happened about the Masters. I was certainly worried about Houston, but it healed a lot quicker. I felt great today. I didn’t feel any pain or discomfort and didn’t even think about it.”

On a day when 96 of the 144-strong field broke par, Sergio Garcia was the top European player with a five-under 67 matched by former Masters champion Charl Schwartzel, while Ernie Els returned a 68.

Sweden’s Henrik Stenson, who can replace the injured Tiger Woods as world number one with a victory in Houston, returned a 71, while former world number one Rory McIlroy finished two under.

McIlroy was three under after eight holes but missed from 10 feet for birdie on the 10th and then three-putted the 11th from long range.

Another shot looked set to disappear when he found the water in trying to drive the green on the short par-four 12th, but a superb pitch ensured he saved par and an excellent bunker shot on the par-five 13th set up a birdie.

However, the two-time major winner was unable to scramble for par on the 14th and had to settle for an opening 70.

McIlroy wrote on Twitter: “Solid, if unspectacular start here in Houston. Really happy with my form from tee to green... Hole a few more putts and I’ll be right there!”