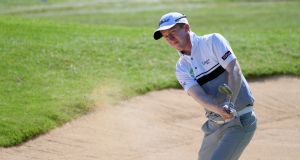 Gavin Moynihan of Ireland plays out of a bunker on the 3rd during day two of the AfrAsia Bank Mauritius Open at Heritage Golf Club in Bel Ombre, Mauritius. Photo: Ross Kinnaird/Getty Images

Gavin Moynihan failed to make the cut in his first European Tour event since securing his card as he slumped to a second round 75 and a total of five over par at the AfrAsia Bank Mauritius Open.

The 24-year-old Dubliner won his playing rights at qualifying school last month but didn’t make the best of starts to 2018 with two double bogeys and two bogeys on Friday sealing his fate despite birdies at the 14th and 18th.

India’s Arjun Atwal remains the man to catch at the halfway stage, but saw his commanding lead trimmed to a single shot at Heritage Golf Club.

Atwal began the day four shots clear of the chasing pack after a stunning course-record 62 on Thursday, but could only add a second round of 70 to finish 10 under par.

That left the 44-year-old a shot ahead of England’s Laurie Canter and the South African duo of Dylan Frittelli and Louis de Jager, with pre-tournament favourite Louis Oosthuizen two shots further back on seven under.

“I was pleased with how I played,” said Atwal, who did not have a practice round at the venue following a 16-hour journey to the island.

“The putter was definitely not as hot as the first day.

“I was hitting the ball just as good but it is tough to follow up a 62 with another low round. I’ll take this one-under. I’m really looking forward to the weekend.”

Canter added a 66 to his opening 67 and believes his recent experience of gaining his European Tour card via the qualifying school has paid instant dividends.

“I’ve played so much golf in the wind recently through Q-School,” the 28-year-old said. “It just feels like I’ve played a load of links golf and that kind of stuff, so I felt quite comfortable out there for a lot of it.

“If you can drive the ball half decent around here you’ll have a fair few opportunities to score and get the wedge in your hand a lot. I’m delighted with the two days really.

“Playing in the wind is something that I would have said, maybe a year ago, that I need to do better. It’s something that I’ve worked on a bit with my coach to try to give myself a few more shots going into the green.”

Envoi Allen the star attraction at Fairyhouse 06:00
Gordon D'Arcy: I know what Joe and Cheika would do. Fix the basics 06:00
Sean Moran: Bloody Sunday centenary weekend will live long in the sporting memory 06:00
Connacht hopeful Papali’i’s red card against Zebre may be rescinded 06:00
Cavan happy to play Dublin anywhere – even Croker, says Galligan 06:00
Here is your handy guide to sport on television this week