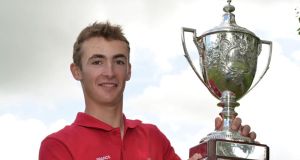 Adrien Pendaries became the first French winner of the Irish Boys’ Amateur Open Championship after a closing round of 74 helped him cruise to an eight-shot victory at Tuam GC.

Five clear starting the day, Pendaries did not have things all his own way after dropping three shots in an outward half of 39 to be just two ahead of Michael Ryan from New Ross. The turning point came on the par-three 11th where Ryan failed to make par and Pendaries rolled in his first birdie of the day to go four ahead.

Pendaries finished with a 74 for a four-round total of two-under-par 286 as Ryan’s title challenge petered out as he dropped five shots on the closing stretch to finish on 77 for 294 for second place.

Oliver Clarke from England, who took the under-17 title, finished alone in third place after a first nine of 34 but he also faded on the home stretch dropping five shots in three holes from the 15th.