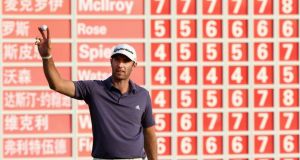 Dustin Johnson waves to the crowd on the 18th hole during the second round of the WGC-HSBC Champions at the Sheshan International Golf Club in Shanghai, China. Photograph: Andrew Redington/Getty Images 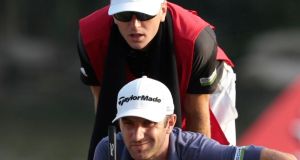 Dustin Johnson and his caddy look over his putt on the 18th green during the second round of the WGC-HSBC Champions in Shanghai. Photo: Aly Song/Reuters

A last-hole gamble backfired on Rory McIlroy as Dustin Johnson stormed into a commanding lead in the second round of the WGC-HSBC Champions on Friday.

McIlroy held a two-shot lead after a sparkling opening 65 at Sheshan International Golf Club and was three clear when he followed five straight pars with birdies at the sixth, seventh and eighth.

However, the back nine was an entirely different story as McIlroy bogeyed the 11th after catching the face of a fairway bunker with his escape and dropped another shot on the 15th by failing to get up and down from a greenside bunker.

The 24-year-old scrambled pars on the next two holes before his drive on the par-five 18th stopped just a few feet from the lake which runs down the right-hand side of the hole, leaving him 228 yards to the green, all over water.

McIlroy had no hesitation in taking the shot on, but saw his second come up several yards short of the green in the hazard. After taking a penalty drop back onto the fairway, McIlroy hit a wonderful fourth shot from 250 yards to 15 feet but missed the par putt and signed for a level-par 72.

That left the two-time Major winner on seven under and five shots behind Johnson, who had charged through the field with a course record-equalling 63.

“Disappointing, frustrating,” was how McIlroy summed up his round to reporters.

“I obviously played nicely on the front nine and then started to hit a lot of sloppy shots on the back. I missed the last six greens in a row, seven on the back nine, so a bit of work is needed on the range this afternoon.

“I hit a couple of bad shots and then I guess I let it affect me a little bit and then I started to doubt myself sometimes. I didn’t hit a lot of quality shots on the back nine.

“It would have been nice to play a bit better and start tomorrow with a few more shots in hand but I guess I’m in a decent position going into the weekend, and still have a great chance at winning this tournament.”

Johnson, four behind McIlroy following an opening 69, birdied six of his first seven holes – his only par coming on the third – and narrowly missed further birdie chances on the eighth and ninth to be out in 30.

The big-hitting American dropped his first shot of the day after missing the green on the 10th, but responded with birdies on the 13th, 14th, 16th and 18th.

“Yesterday I doubled my third hole of the day, the 12th, and played really well after that and this morning on the range I worked on a few things and hit it really well coming out of the gates and obviously putted well,” said Johnson.

“This course is great, you put this in America and it would hold up to any of them over there. I think it’s a great course, it’s in great shape and the greens are really good but you have to be spot-on with your iron shots because there is a lot of undulation and today I controlled my distance really well and drove it really well.

“There are still two more days of golf left so I will come out tomorrow and try to do the same thing I did today. I don’t tend to play defensively, I just play my game and I play pretty aggressively.”

Six players are a shot behind on six under, defending champion Ian Poulter carding a 67 to join fellow Englishman Tommy Fleetwood, Spanish duo Sergio Garcia and Gonzalo Fernandez-Castano – winner of the BMW Masters on Sunday – Ernie Els and Graeme McDowell in fifth place.

Mickelson, who took nine on his penultimate hole on Thursday in an opening 71, birdied five of his last six holes in his 68, dropping a shot on the reachable par-four 16th after hooking his tee shot into the water.

“The last time I made a quadruple bogey, on the 14th hole at East Lake in 2009, I won the tournament, the Tour Championship, so it’s an omen,” Mickelson said.

“I’ve made too many mistakes but I am going to continue to play aggressively out here because I have to make birdies to catch the lead. Hopefully I’ll eliminate a few mistakes here or there.”

Rose’s water trouble came on the last, the world number five thinning a bunker shot across the green and into the hazard on his way to a closing bogey and round of 71.