Double incentive for Rickie Fowler as he returns to US Tour 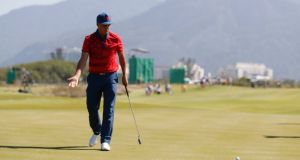 Rickie Fowler: “The Ryder Cup is the best team event there is in golf.” Photograph: Erik Lesser/EPA

Rickie Fowler is looking to boost his Ryder Cup chances at this week’s Wyndham Championship in North Carolina.

Fowler finished tied for 37th as the sport made its return to the Olympic Games last week, and is one of only a handful of players who have made the dash from Rio to Sedgefield CC.

The 27-year-old has two reasons for doing so. He is currently 12th in the US Ryder Cup qualification race, with just the top eight automatically exempt for next month’s contest at Hazeltine and only this week and next to improve his standing.

“The main reason, obviously is that it would be nice to get some more FedExCup points,” Fowler said.

“But my commitment to the Ryder Cup and wanting to be a part of that team [is another reason].

“There are different styles of events, but the Ryder Cup and the experiences I’ve had there, it’s the best team event there is in golf. I don’t want to be left off that team, so I want to go there and try and get myself some points.

Fowler featured in the biennial contest in 2010 and 2014 and would appear an obvious pick for Love should he not qualify automatically.

However, Fowler is keen to avoid leaving his fate in other people’s hands. “I don’t want to assume anything,” he said.

This week represents the last chance for those outside the top 125 on the FedEx Cup to secure their playing card for next season.

South Korea’s Whee Kim is currently the man on the bubble at 125th, but can take confidence from the form that saw him finish in a career-best tie for third at the John Deere Classic last week.

Major champions Retief Goosen and Geoff Ogilvy are among those in need of a big week to climb into the top 125, .