Shane Lowry and Graeme McDowell finish in a tie for ninth place, after final round of 66 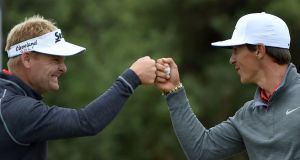 Thorbjorn Olesen and Soren Kjeldsen celebrate making a birdie during the final round of the World Cup of Golf on the Kingston Heath course in Melbourne. Photograph: Getty Images

Soren Kjeldsen and Thorbjorn Olesen kept their nerve and shot a six-under-par 66 in the final round fourballs to give Denmark a first World Cup of Golf triumph by four strokes at Kingston Heath on Sunday.

Ireland's Shane Lowry and Graeme McDowell carded a bogey-free final round 66, to finish 11 under par overall. Leaving them in a tie for ninth place.

The Danes started the day with a four-shot cushion and seven birdies, including one at the last when Olesen curled in a 20-foot putt, combined with a single bogey were enough to hand them victory on 20-under in the 58th edition of the tournament.

“It’s difficult to describe my feelings,” said Kjeldsen, before lifting the Hopkins Trophy.

“We both came in this week in good form and we just gelled so well. A friendship has been built as well, and I think that’s the whole point of the World Cup of Golf.”

French duo Victor Dubuisson and Romain Langasque led the chasing pack with a sparkling nine-birdie 63 to share second place on 16-under with China’s Wu Anshun and Li Haotong (65) as well as American pairing Rickie Fowler and Jimmy Walker (66).

On another day of low scores, the Swedish pairing of Alex Noren and David Lingmerth tore up the sandbelt course with a flawless 62 but that was only good enough for fifth place on 15-under, a shot ahead of Italy (64) and Japan (65).

Hosts Australia, who were defending the title won by Adam Scott and Jason Day at Royal Melbourne in 2013, finished in a share of ninth on 11-under after Scott and Marc Leishman combined for a final round 65.

It was a brilliant second round 60 featuring two eagles and eight birdies that gave the Danes a three-shot lead and they never looked like relinquishing over the final two rounds.

They parred the first five holes on Sunday before Kjeldsen’s tee shot to within three feet of the sixth hole gave them a first birdie and they reached the turn even for the day after a bogey on the par-five eighth.

If there were any nerves, they did not show them and after 26-year-old Olesen hit his approach shot to within inches of the hole at the 10th, his partner drained a much longer birdie putt in any case.

Four more birdies followed in the next five holes to kill off any hopes their playing partners, world number 12 Fowler and US PGA Championship title holder Walker, had of overhauling them.

Second place was a best ever finish for China in the event and Wu thought they had been in with a chance of giving their nation a maiden victory when they hit the turn at three-under with Denmark still on their run of pars.

“After two early birdies the lead was only two shots so we almost touched the trophy.”