Danny Willett in Kuala Lumpur contention after sizzling back nine 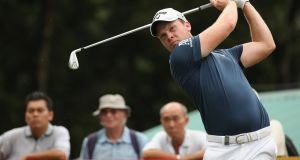 Danny Willett produced a brilliant run on the back nine to sit a shot off the lead at the Maybank Championship in Kuala Lumpur. Photograph: Getty

Danny Willett made the most of some good fortune to enjoy an ideal start in his bid for back-to-back victories in the inaugural Maybank Championship Malaysia on Thursday.

Willett was one over par after seven holes of his opening round in Kuala Lumpur, but birdied the eighth and ninth before coming home in 31 to card a six-under-par 65 and lie one shot behind clubhouse leader Nathan Holman.

The world number 13 chipped in for an eagle on the 13th, holed from 45 feet for birdie on the next and picked up another shot on the par-five 15th, before ending his round in style with another long birdie putt on the last, which slammed into the back of the hole before dropping.

Willett admitted on Twitter his last 11 holes were “outrageous” and added on Sky Sports: “It’s a strange old game. We hit it close a lot on the front nine and made nothing until eight and nine.

“And then we’ve hit it a bit scabby down the last, took advantage of the par fives and holed two really long ones. It kind of goes in circles. You miss a few short ones and then you don’t expect to hole a long one like that (on 18), especially going at that pace, but I’ll take it.”

Asked about trying to win a fifth European Tour title just a fortnight after victory in the Dubai Desert Classic, Willett added: “We’re doing all the right things. The work that we’re doing is the same, week in week out.

“The warm-ups and workouts are all the same so I am trying to keep the feelings as similar as possible but it’s a stupid game isn’t it?

“You can play well and shoot millions or you can scab it a bit and shoot a good score. Fortunately a few things went our way today so hopefully we can keep riding that wave and see what comes.”

Holman also has a European Tour victory to his credit this season, the 24-year-old from Melbourne claiming a maiden win on home soil in the Australian PGA Championship in December.

And after top-40 finishes in Qatar and Dubai, Holman carried on where he left off at Royal Selangor with a flawless 64 containing seven birdies.

At 7,079 yards the course is short by modern standards, but the tree-lined fairways place a premium on accuracy and Holman said: “It suits my eye. I quite like the look of it and obviously that’s shown through with the score I had today so I’m looking forward to playing the next three days.

“I think 64 is pretty good. There’s a lot of chances, but you get in the rough and it can really grab you so seven under, I’m really happy with that.

“I just played really well to be honest. Every part of my game was quite good and I was saying a few weeks ago that my game has been trending in that right direction so it was nice to get a really good one in.”

England’s Tommy Fleetwood, American Peter Uihlein and Angelo Que of the Philippines were alongside Willett on six under, with former Open champion Louis Oosthuizen two shots further back. Two-time major winner Martin Kaymer had to settle for a level-par 71.

England’s David Horsey had been forced to withdraw from the event after playing his first nine holes in three over par, the 30-year-old then revealing on Twitter he would require surgery next week which will keep him out until April.

“Disappointed to have to withdraw from maybankchampio1. Shooting pains up my lower back made it impossible to continue,” Horsey wrote.

“Now having a knee op on my R lateral meniscus on Tue, which puts me out until Spanish Open. Hope to be back fitter and stronger by then.”

Meanwhile Darren Clarke and Paul McGinley are both eight shots off Holman after opening rounds of 72, while Niall Turner posted a 74 to sit two shots further back.