Daniel Pearce storms into the lead at Natadola Bay 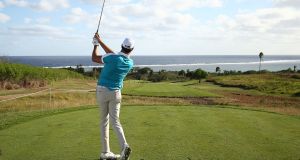 New Zealand’s Daniel Pearce holds a one-shot lead after the first round of the Fiji International thanks to a brilliant burst of scoring at Natadola Bay.

Pearce began his back nine with an eagle and three straight birdies to open up a three-shot lead before two late bogeys meant he had to settle for an opening six-under-par 66.

Fellow Kiwi Ben Campbell and Australia’s Daniel Valente were Pearce’s nearest challengers on five under, with home favourite and course designer Vijay Singh five shots off the pace following a 71.

“I holed a really nice putt on the first hole for birdie, which got the momentum going in the right direction,” Pearce said. “There was a lot of good golf. I didn’t quite finish it off how I’d like to but I’m pretty happy.

“The putter was pretty hot today so I rolled in a few putts from all over the place, which was nice.”

Campbell reached the turn in 35 after following a birdie on the first with eight straight pars, but his round came to life after the turn with three birdies in a row from the 10th.

A bogey on the 16th briefly halted his progress, only for the 25-year-old to bounce back with an eagle on the 17th to get within a shot of the lead

“It was a solid round,” Campbell said. “I thought anything under par today would be a great score. It wasn’t easy out there, that’s for sure.

“So I’m really happy to get off to that kind of start. I think at most tournaments you’d take a five-under first round anyway.”

Uefa meet to re-evaluate hopes of finishing current season 06:48
Gerry Thornley: Rule changes could transform rugby by time of next World Cup 06:00
Five newly-released sports books to read over the coming weeks 06:00
Sky Sports customers set to save on bills until Premier League returns 06:00
My favourite sporting moment: Phil Mickelson’s miracle shot at the 2010 Masters 06:41
Here is your handy guide to sport on television this week