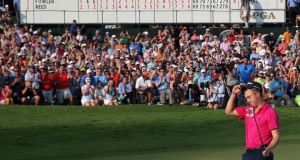 Justin Thomas finishes the 18th hole during the final round of the PGA Championship golf tournament at the Quail Hollow Club. Photograph: PA

Criticisms of the BBC’s live coverage of the US PGA Championship were as immediate as they were predictable. Peter Alliss, again, was widely described as an anachronism, representing the dated image golf is trying desperately hard to leave behind.

That elements of the BBC’s broadcast were only available via red button, or without high definition, was another cause for social media screaming. The slightest gaffe was met with widespread derision and insistence of incompetence.

Criticism of the coverage was inevitable from the moment a BBC deal for the Quail Hollow major was confirmed. It was easy to infer minds were made up from as soon as Sky Sports’ loss of the tournament broke. Anything else, surely, was second best.

In many respects, such negativity is justified. The BBC’s gradual withdrawal from mainstream television sports coverage is sad, with the limited basis in which they cover sports like golf inevitably leading to shortcomings. Sky’s technology renders the BBC’s output akin to a Commodore 64 in comparison to a MacBook Air. That no suitable alternative to Alliss, now 86, has been discovered says nothing for the BBC’s emerging talent. Being blunt, it doesn’t say much for Alliss’s willingness to let go, either. His ramblings relating to a new kitchen for the wife of Zach Johnson at St Andrews in 2015 should have proved a final line in the sand.

Such noise is otherwise misplaced. It is also, typically, difficult to gauge in relative terms. Not everyone who watches golf indulges in social media. Those with a gripe are often the loudest. In fact, the ever-growing older demographic in the UK might have been perfectly happy to take in a major championship via terrestrial television, with Alliss intrinsically linked to that group’s enjoyment of the sport. It is seriously difficult to the point of impossible to make any argument that making golf more accessible to the public is detrimental.

There is an element of phoney war; football is massively popular on terrestrial television because of the overall attractiveness of the sport and regardless of inferior production value against subscription channels. To suggest people would switch off from golf because of a lack of fancy graphics seems odd. More serious issues relate to rounds stretching to more than five hours at Quail Hollow plus the failure of Rory McIlroy or Jordan Spieth to challenge for the Wanamaker Trophy. Pieced together, it’s a hard sell.

BBC2’s reach, for only two hours of coverage per day, was just over 2m

It was Sky – new golf channel et al – who failed to extend their deal with the PGA of America for this particular event. This had absolutely nothing to do with the BBC. As that contractual scenario unfolded, and with only weeks before the tournament was due to start, the BBC seized upon opportunity.

It is strange for such a move to be deemed worthy of abuse towards the corporation – was a smarter move to sit back and allow a blackout? – and even more so when the hardly insignificant and existing matter of the World Athletics Championships is factored in. The London event drew an audience which would always be massively in excess of the US PGA.

The BBC couldn’t be expected to clear schedules, hence made the best of what it could; including complete live broadcasting over the same time span as available in the US. There is no suggestion of this being the first step in a serious BBC move back into golf; rather, a service was provided for a knockdown price.

BBC2’s reach, for only two hours of coverage per day, was just over 2m. Red button coverage reached 1.5m. Requests for live coverage via the BBC Sport website and iPlayer ran to 725,000. There was a spinoff, by virtue of 2.1m unique browsers to the BBC website’s golf pages over the US PGA’s duration. In short, and despite all the moaning, people bought into the event, one which was hardly one of the most enthralling in recent major history.

The loss of another major would be disastrous for Sky

No debate relating to the BBC, Sky and golf can be held with regards the isolation of one tournament. Next year’s Masters remains up for grabs for a main British broadcaster, with Sky’s initial position towards Augusta National of wanting exclusive rights understood to have taken tournament organisers by surprise. Augusta is in the midst of their latest, three-year collaboration with the BBC. The Masters, typically, works on short-term contracts and those behind it are relaxed with the next event still eight months away.

During the recent Open Championship, it is understood Masters officials held talks with BT Sport. A source close to that discussion disclosed it was “less than satisfactory” in nature. Not only is BT’s willingness to branch into golf intriguing, on face value they appear a more natural bedfellow – on basis of shared talent, for starters – with the BBC than Sky.

From a public relations standpoint, the loss of another major would be disastrous for Sky, which prompts the widespread theory that a deal at least for 2018 will somehow be done. Nonetheless, the wider picture of Sky’s budgetary challenges injects sufficient doubt.

Additional and relevant background factors relate to the European Tour’s chief executive, Keith Pelley, being apparently of a mind to shake up broadcasting agreements plus the dabbling in sport as implemented by Amazon, as surely soon to be replicated by other less traditional brands.

The BBC won’t win awards for US PGA coverage. They wouldn’t have expected to. Still, to castigate them for circumstances which led to events of last weekend would mean a level of target missing thankfully absent from the best in world golf.