‘It’s special to be here in Holland and defending your own tournament,’ says Luiten 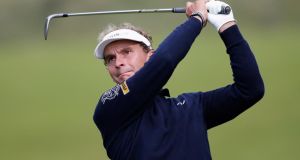 Joost Luiten of the Netherlands hits a shot on the ninth hole during the KLM Open ProAm held at De Kennemer Golf and Country Club in Zandvoort,Netherlands. Photo: Dean Mouhtaropoulos/Getty Images

Defending champion Joost Luiten will look to put the disappointment of missing out on the Ryder Cup behind him in the KLM Open this week.

Luiten was one of the contenders for a wild card for Gleneagles, with European captain Paul McGinley impressed by his performance in the EurAsia Cup earlier this year.

However, the 28-year-old was unable to reproduce his best form in the latter stages of the qualifying campaign and McGinley opted for Stephen Gallacher, Ian Poulter and Lee Westwood.

Luiten finished just a shot behind Gallacher in the Italian Open on his last appearance and has now turned his attention to defending his national open at Kennemer Golf Club in Zandvoort.

“It’s very special to be here in Holland and defending your own tournament,” said Luiten, who beat Spain’s Miguel Angel Jimenez in a play-off last year. “I came back here after last year to do a little bit for TV which was very emotional so it was good to get that out of the way for this week and hopefully I can show the people again what I did last year.

“I think it’s going to be very difficult for me because the expectations of all the people are so high. It’s difficult but that’s what you have to deal with.”

Thomas Bjorn is the only member of Europe’s Ryder Cup team competing in Zandvoort and the Dane is also scheduled to make it three tournaments in succession before Gleneagles in next week’s Wales Open.

The 43-year-old has not played in the contest since 2002 but qualified automatically and said: “It’s brilliant. You go through the qualifying process and there is so much going on in your head. You obviously try to put it at a distance but it is always there. You are always asked questions.

“Once that is over you have to come down a little bit and then build yourself up again. It’s a mentally tough time because the last few events of qualifying are big events.

“It’s draining so you have to come down and build yourself up to the level again. I’m using these weeks to get myself ready and hopefully in the process of that I can play some decent stuff. There’s always a balance of how you do that. Some guys take the time off and go in fresh. I like to be on a run of tournaments and I normally play well on the back end of a run.

“The danger is if you don’t play well you can play yourself out of confidence. It is there at the moment as it has been a good year. I’m just trying to get in there with a chance to win tournaments and have that confidence going into the Ryder Cup.”

England’s Simon Dyson will be among the favourites for the title after winning it three times previously, twice at Kennemer and once at Hilversum.

No player has won the KLM Open four times, while Dyson is also bidding to become just the seventh player to win a European Tour event on four separate occasions.

“It’s one of the first flights I book for the year,” Dyson said. “I absolutely love it here. I remember the first time I came in 2006 and playing the course and thinking it suits my eye straight away.

“I beat Richard Green in a play-off and then came back in 2009 and managed to beat Peter Lawrie and Peter Hedblom in a play-off. So if I manage to get in a play-off this year, I fancy my chances.”

Whether Dyson would fancy the unique hole-in-one prize on offer remains to be seen, with the first player making an ace on the 15th winning a trip into space courtesy of XCOR Space Expeditions.