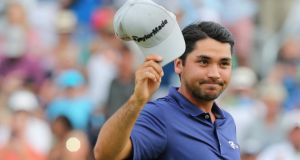 Jason Day of Australia celebrates on the 18th green after his six-stroke victory at The Barclays at Plainfield Country Club in Edison, New Jersey. Photo: Scott Halleran/Getty Images

I know you have all heard it before to the point of irritation but golf really is a game of confidence and Jason Day is living proof. I remember the glory days of golf for Retief Goosen some 11 years ago when I was toting his bag and nothing seemingly could go wrong. I was acutely aware that it couldn’t last, but tried to enjoy that special place of success.

Even if something did go wrong it appeared easy to make it all right again.

Jason Day hit some wide drives on eight and again on the 12th last Sunday evening in the final round of the first of the Fed Ex Cup Playoff tournaments. Potential bogeys were transformed into easy pars with the gentle hand of lady luck and a golfer riding high with confidence.

Then the piece de resistance on the 13th filled me with a sense of nostalgia, hankering for the old days when you seemed to get all the right bounces. Yet another wide drive right and he fortunately stayed the right side of the out of bounds fence, got a reasonable lie and a clear shot with a wedge over the tall oak trees and onto the green. Even when he raced his approach putt six feet bye he nonchalantly tapped in for a par to keep his two-shot lead over Henrik Stenson.

Oh and then on the next hole he just banged in a 30-footer, at pace, for a birdie, leading me to believe that the Barclays Championship was a fait accompli for the current US PGA champion. Everyone else may as well make for New York City or Boston for a head start on a night out because nobody is beating Jason Day at the moment. In fact if they gave him a wild card for the US Open tennis tournament this week he may well have a hope of competing such is the supreme confidence now reigning in Jason Day’s psyche.

To the 15th, his 33-foot putt on this hole had a six per cent chance of going in according to the statisticians. Stats can be misleading especially with a talented golfer with a positive vibe; in it plopped despite a 94 per cent chance of missing.

This is what Jason Day pounded all those thousands of bags of golf balls for when he was a youngster and why he almost turned to stone on the putting green honing a boringly repetitive but ultimately exciting putting stroke. A five-shot lead with three to play and bullet proof, what a space to be in as a professional golfer. But for those of us who have looked at golf over the past few years there wasn’t always that blasé, happy-go-lucky air about the amiable Australian.

He didn’t always defy those outrageous odds and hole every 30-footer he looked at or at least burn the hole with them. So why is he doing it now?

Okay for the last time I’ll say it, golf is a game of confidence but I’ll also add that when you hit it a long way off the tee and hole putts there is a good chance that you will win. Tiger Woods and Phil Mickelson used to smash it all over the rough of the United States in their prime, somehow get it on the green and hole the putt for glory so many times we all thought it was normal.

I recall 2004 and coming back to the European Open with Retief after he had only putted 23 times in the final round to beat Phil Mickleson in the US Open at Shinnecock Hills on Long Island. He didn’t play particularly well and ended up winning quite easily by holing more than his fair share of putts. Even if something went wrong he put it right by not panicking. After winning his second US Open, the rest was a bonus.

Lest we forget the most dominant player of the modern era, Woods, there was a time when everyone, whether openly or privately, admitted that they were more than likely playing for second place when Tiger was rampaging through the field.

His supreme belief lasted for over a decade. It’s a bit early to predict but Jason Day has kept his mojo going for three weeks so far and judging by the focused, relaxed and purposeful look on his happy golfing face, his odds must be short for the FedEx title.

While Day could do no wrong there was another golfer who was very familiar with that feeling of supreme confidence battling at the other end of the field.

He wasn’t fighting for the title, more modestly the right to play in this week’s event in Boston. In 2011 Luke Donald won both the European and US PGA Order of Merits. He was world number one for over 50 weeks. He is now ranked 63rd in the World and life on the fairways has changed dramatically. There is a subtle difference on the golf course in players ranked 60 places apart in the world rankings – and the most fickle difference is confidence.

When Day was being interviewed for the third time as victor in his last four outings last Sunday he naturally said all the things that would make a sports psychologist drool if he was his pupil; “ I was very patient, I had no expectation, I have put in a lot of hard work and dedication, I can only control what I can control”. He said it was easier to finish off the Barclays tournament than his first Major. With a weekend total of a mere 125 shots I am not surprised.

I hope it lasts for a long time for the Queenslander but of course it will not last forever. Ask Tiger, Luke, Phil, Vijay Singh, David Duval, Ernie Els and Retief Goosen. It will end but that’s not what Day is now thinking. Just as Tiger or Luke didn’t ever contemplate it back then. It will happen quite seamlessly just as autumn slowly gives way to winter after a long hot summer. But some summers last longer than others. Jason Day is experiencing a heatwave in his golfing career and he is visibly enjoying the temperature. He knows it’s not going to last forever but like all true competitors he will try to defy the odds for as long as he possibly can.