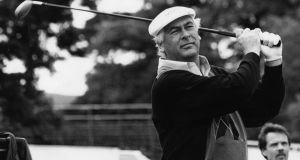 President Michael D Higgins said ‘Christy represented his country and its people on the international stage with distinction, dignity and great humour’

Mr Higgins said the golfer represented Ireland with “distinction, dignity and great humour” during his sporting career. “He was always very proud of his Galway connections and gave support to so many admirable and humanitarian projects,” he said.

“He will be missed by not only his sporting colleagues, but also by his community, and in particular by his friends. We will miss his warm personality, his generosity and his great resilience of spirit.”

Mr Kenny said he knew Mr O’Connor personally, and described him as a man who “loved and lived life to the full”.

“His premature passing will be a source of great sadness to many Irish people and all golfing fans in Ireland and across Europe,” he said. “Like his uncle, he was a trailblazer on the European Tour and an example to many aspiring golfers around the country.”

Mr Kenny recalled a shot by Mr O’Connor with a two iron from the middle of the 18th fairway during the 1989 Ryder Cup at the Belfry, which secured a win over US golfer Fred Couples and helped Europe retain the trophy.

Very sad news today about Christy O'Connor Jnr. An absolute legend of Irish golf. Thoughts and prayers go out to his family and loved ones.

Mr O’Connor was a multiple winner on the European, Senior and Champions Tours but Mr Kenny said the Ryder Cup moment was the “crowning glory” for the golfer. “It is an image that will remain fixed forever in the minds of all Irish golf and sporting fans,” he said.

Tánaiste Joan Burton said she was “saddened” by the death of Mr O’Connor, whom she described as a “golf legend”.

“Christy led a very active and full life; he achieved great successes as a golfer,” she said. “He competed in over 20 major championships...Without doubt, he will be missed by many people both in his home-town Galway and in the golfing community here and abroad.”

Minister of State for Sport Michael Ring said Mr O’ Connor made a major contribution to sport in the State and was a role model for many Irish golfers. “Christy was a very talented golfer and everyone involved in Irish sport will be saddened at the news of his passing today,” he said.

In a statement, NUI Galway director of sport Mike Heskin said he was “shocked” at the news of Mr O’Connor’s death.

“Christy was a proud Galwegian and a wonderful ambassador for Galway, Irish golf and Irish sport in general,” he said. “We will all remember his great performances in the Ryder Cup but also his inspirational leadership in Irish sport and his performances on the world stage, which set the pathway for so many others to follow.”