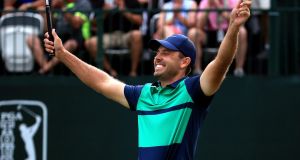 Charl Schwartzel of South Africa reacts after a putt on the first playoff hole on the 18th green to win the Valspar Championship. Photograph: Sam Greenwood/Getty Images

Charl Schwartzel secured his first victory in the United States since the 2011 Masters by beating Bill Haas in a playoff at the Valspar Championship in Florida on Sunday.

South African Schwartzel came from five shots behind in the final round to card a four-under-par 67 before beating Haas with a tap-in par at the first extra hole.

While the win will boost Schwartzel’s confidence going into next month’s Masters, world number one Jordan Spieth has some work to do as he tunes up for his title defence at Augusta.

Spieth carded a 73 on Sunday to tie for 18th on even par. He was outplayed by 22-year-old amateur Lee McCoy, who shot 69 to finish fourth.

Ireland’s Padriag Harrington hit a sole birdie on the eighth to card a final round 70 - leaving him in a tie for 33rd on two over overall.

Schwartzel turned up the heat on the leaders after the turn.

“I just caught lightning on the back nine. I’m very proud of myself,” he told Golf Channel.

“I was trying to hit mostly middle of the green, keep the ball in play and take the birdies where they came.”

Schwartzel and overnight leader Haas (72) finished regulation at seven-under-par, two strokes ahead of Ryan Moore on the Copperhead Course at Innisbrook Resort in Palm Harbor.

Haas then made a mess of the playoff hole, the par-four 18th, hitting a poor shot from a greenside bunker that afforded Schwartzel the luxury of two-putting for victory.

“I probably won’t be able to sleep tonight thinking about that one. That was just poor execution,” Haas, a six-times PGA Tour winner, said of his bunker shot.

Schwartzel’s victory was his third in his last six starts after winning twice in European Tour events back home. It was his 15th professional victory worldwide but just his second on the PGA Tour after his Augusta National triumph five years ago.

Schwartzel endured some lean times after winning the Masters and said the green jacket weighed heavily on his shoulders.

“After winning Augusta, you think short term you’re going to win a lot, but it was a rough ride,” he said.

“It was tough for a few years. Game felt good enough but it became a mental thing and it’s nice to overcome it.”