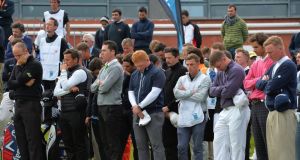 A minutes silence is held on the putting green for caddie Ian McGregor who tragically died on the ninth fairway today, during the final round of the Madeira Islands Open at Club de Golf do Santo da Serra. Photograph: Mark Runnacles/Getty Images

The Madeira Islands Open was being played to a finish today despite the death of caddie Ian MacGregor on the course.

Zimbabwean MacGregor, who was working for Scotland’s Alastair Forsyth, suffered a heart attack on the ninth hole at Santo da Serra, a steeply undulating course more than 2,000 feet above sea level.

An indefinite suspension of play was initially announced, but the decision was eventually taken to resume play at 6.0pm, local time.

A statement from the European Tour read: “It is with great sadness and deep regret that we report the untimely passing of caddie Ian MacGregor during play on the final day of the Madeira Islands Open — Portugal — BPI.

“Everyone at The European Tour extends our deepest sympathies to the friends and family of Ian at this time.

“Following consultation with the players and caddies involved, however, it has been decided that play should continue and the tournament should finish. A minute’s silence has taken place at the clubhouse and play resumed at 6.0pm local time.

“All administration will be taken care of by The European Tour and we will help in any way possible.”

Gary Player led the tributes on Twitter, writing: “RIP Big Mac. You will be missed. My condolences.”

England’s Matt Blackey also expressed his condolences, adding: “Just heard that one of my old caddies passed away today doing the job he loved in Madeira. Thoughts and prayers with his family! #RIPMac.”

Scottish caddie Craig Connolly, who was preparing to work for joint-leader Martin Kaymer in the final round of the Players Championship in Florida, wrote: “Just got to the course and hearing the news that Ian MacGregor (Mac) died on the course in Madeira. Very sad news! Great character!”

The European Tour’s 1,500th tournament had been reduced to 36 holes due to numerous lengthy delays caused by fog.

The decision to finish the event was criticised by a number of players, including Sweden’s Joel Sjoholm who had previously worked with MacGregor. “Can’t believe that they are sending out players to finish the 2nd and final round when someone just died on the course!!!,”

Sjoholm, who missed the 18-hole cut in Madeira, wrote on Twitter. “R.I.P my dear Mac!Way to young! This going to be a tough evening!”

France’s Jean-Baptiste Gonnet, who also missed the cut, added: “Can’t believe there are still playing in Madeira.there is no respect anymore.how you can even walk on the 9th fairway. RIPmac.”