South African wins on home soil after remarkable final round 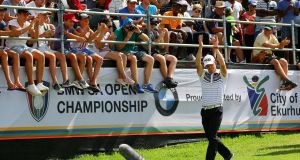 South Africa’s Brandon Stone recovered from surrendering a five-shot lead to win the BMW South Africa Open after a remarkable final round in Johannesburg.

Stone fired a closing 71 at Glendower Golf Club to finish 14 under par, two ahead of compatriot Christian Bezuidenhout, with England’s Daniel Brooks a shot behind in third after a bogey on the 18th.

The 22-year-old carded seven birdies, six bogeys and just five pars as he went from five shots ahead to two behind in the space of seven holes, before four birdies in the next five secured his first European Tour title.

After play was disrupted by afternoon thunderstorms for the first three days, Stone completed a third round of 65 on Sunday to take a two-shot lead which he swiftly extended with birdies on the second and fourth.

However, Stone then carded a hat-trick of bogeys from the fifth – he did well to restrict the damage on the sixth to a single shot after finding water off the tee – before getting away with a wild tee shot on the eighth to birdie the par five.

Stone, who attended the same American university as world number one Jordan Spieth, was lucky to see his approach to the ninth stop on the bank of a water hazard, but after chipping to three feet he missed the par putt before three-putting the 10th.

Brooks had recovered from a bogey on the second to birdie the sixth and eighth and found himself two shots clear when Stone also bogeyed the 11th following another wayward tee shot.

However, the 28-year-old from Basildon promptly three-putted the 10th from long range and, with Stone stopping the rot with a birdie from five feet on the 12th, the pair were tied for the lead.

Bezuidenhout briefly made it a three-way tie with a birdie on the 13th, but playing partner Stone also took advantage of the par five to edge back in front.

A two-putt birdie on the 15th momentarily took Stone two clear, only for Bezuidenhout to get up and down from a greenside bunker on the same hole before Brooks holed from close range on the 13th.

Stone extended his lead to two shots with his fourth birdie in five holes on the 16th and crucially holed from six feet on the next for par, where Bezuidenhout three-putted to effectively end his chances.