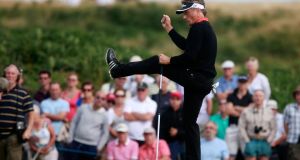 The 56-year-old German superstar was the only player in the 144-strong field to truly master this challenging links course overlooking the Bristol Channel and the fiery conditions and romped to a staggering 13-stroke victory,the biggest not only in the 27-year history of this tournament but also in the history of Senior Major Championships.

It is also the second equal largest in Major Championship history – Tiger Woods won the US Open by 15 strokes in 2000 and Old Tom Morriis won the Open by 13 in 1862.

He produced four stunning sub-70 rounds to finish with a 72-hole total of 266 for a wire-to-wire success heralding a happy return to Wales where he won his first European tour title – the Dunlop Masters – at St Pierre, Chepstow in 1980.

And his margin beats by six strokes the previous record-winning margin achieved by New Zealand left-hander Bob Charles at Turnberry a quarter of a century ago. His 18-under-par total is the lowest in relation to par in the Senior Open Championship.

Langer was in a class of his own as he posted scores of 65,66,68 and 67 even defying yesterday’s stiffening southerly wind blowing off the Bristol Channel.It was only a matter of how many he would win by once he had carded his third round 68.

Before yesterday Langer’s largest winning margin in a Senior Major was three strokes over Fred Couple at the 2010 US Senior Open .

A momentary lapse cost him a bogey five on the 11th but he immediately made amends with a birdie two at the short 12th.Then five pars followed before he put his second shot at the last on to the back of the green and took two to get down for a birdie four and a brilliant 67 for a 266 total.

“I just did not make too many mistakes. My driving was good and so was my long putting. I lacked concentration a couple of times but it really has been a wonderful week,” said Langer who now qualifies to play in next year’s Open at St Andrews.

Montgomerie bidding to become only the second player after Gary Player to win three Senior Majors in the same season after his two successes in the States finished extremely strongly with two birdies for a closing round of 69-two under par- and a 72-hole total of 279- five under par.

The Scot started off the day two under par and bogeys on two of the first three holes threatened to de-rail his hopes of a runners-up finish but he soon got his act together and reached the turn in level par. Seven pars followed before his back-to-back birdies to finish.

Canadian Rick Gibson,England’s Barry Lane and American Tom Pernice Junior finished in a tie for third place at two under par. Tom Watson fell away in the last round with two double bogeys on the back nine in a disappointing 77 which gave him a 286 score-two over par while Fred Couples also struggled for 288.

The two Irishmen still in the field yesterday Philip Walton and Ronan Rafferty both struggled. Walton, who had equalled the course record 64 on Saturday, flopped to an 80 for a nine over par 293 aggregate after six bogeys on the back nine while past Amateur star Rafferty took 76 for a 293 total. Guardian Service