Lawrie best of the Irish on six under, 10 adrift of Indian winner, McDowell two under 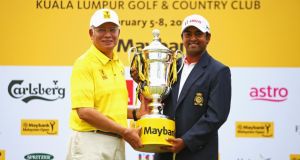 Anirban Lahiri of India is presented with the trophy by president of Malaysia Abdul Razak after victory in the Maybank Malaysian Open at Kuala Lumpur Golf & Country Club. Photograph: Ian Walton/Getty Images

Indian Anirban Lahiri secured his breakthrough European Tour title by overhauling Austrian Bernd Wiesberger in a dramatic final round of the Malaysian Open on Sunday.

Just three months after coming through qualifying school, Lahiri made up five shots on overnight leader Wiesberger before holding his nerve over the last few holes to emerge a winner by a single stroke after carding a four-under-par 68.

“I don’t think it’s sunk in just yet,” said the 27-year-old after finishing 16-under for the tournament. “But I’m pretty sure when it hits home it’s going to be a really happy moment for me.

“I think I’ve got a bad habit of making it hard for myself, but I’m happy I got over the line, as ugly as it was towards the end.”

Lahiri, who soared into contention with a third round 62 on Saturday, got off to a blistering start at the Kuala Lumpur Golf & Country Club by birdying four of his first five holes.

Wiesberger also picked up shots at his first two holes and it was only when the Austrian double bogeyed the par-five seventh that the duel was on. Lahiri sank a 40-foot putt at the 17th to grab the outright lead for the first time but Wiesberger birdied the 16th to tie the contest up again.

It lasted only one hole before Wiesberger made a mess of his approach shot at the 17th to hand the advantage back to Lahiri.

Lahiri said Saturday’s round had been crucial to his becoming only the fourth Indian to win a European Tour title and was already calculating his chances of a US Masters debut next year.

“In hindsight that was one of the most crucial rounds of my career and it’s fantastic when you play well at the right times,” he added. “The Masters is definitely one of my targets. I don’t know how far I’ll move up (in rankings), but I’m pretty confident now with this win I should have a pretty good chance.”

Wiesberger’s fourth successive top-10 finish put him in the top five on The Race to Dubai, but the 29-year old was left to ruing his closing 74.

“It hasn’t quite finished the way I intended to,” said Wiesberger. “After the hiccup on five, I didn’t hit it anywhere near as good as the last 15 rounds. It’s tough to say, but it is what it is and unfortunately I beat myself out of it today.”

Englishman Paul Waring (73) and Spaniard Alejandro Canizares (74) finished tied for third on 13 under, while defending champion Lee Westwood returned 75 for a share of fifth.

Peter Lawrie was best of the Irish, 10 shots off the pace on six under after a final round of 70. Graeme McDowell finished on two under after a disappointing 75, while Michael Hoey shot a 77 to sign for a two over total of 290.

Paul McGinley finished on 11 over after he too shot a 77.