Andy Sullivan makes all the right impressions in Abu Dhabi 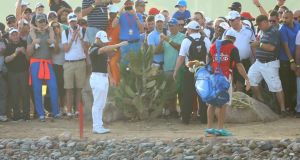 Rory McIlroy of Northern Ireland takes a drop on the 9th hole during the second round of the Abu Dhabi HSBC Golf Championship. Photograph: Andrew Redington/Getty Images

After the start of play had been delayed by two hours and 45 minutes due to thick fog, Sullivan began his round with three successive birdies and ended it the same way to card a second successive 67.

At 10 under par, Sullivan led by one from American amateur Bryson DeChambeau, who had nine holes remaining, with the marquee group of Jordan Spieth, Rory McIlroy and Rickie Fowler completing 13 holes before darkness fell.

McIlroy and Fowler were five under par, but while Fowler was three under for the day, a frustrated McIlroy had carded 12 pars and a solitary bogey.

World number one Spieth, who started his season by shooting 30 under par to win the Tournament of Champions in Hawaii by eight shots, was two strokes further back after two bogeys and one birdie.

Sullivan, who compiled a perfect 3-0 record under Clarke’s captaincy in the EurAsia Cup last week and was paired with the former British Open champion and Scotland’s Russell Knox in Abu Dhabi, said: “I got off to a flying start but to dig deep and finish the way I did after struggling for four or five holes puts me in good stead for the rest of the tournament.

“I’m just trying to kick on. I don’t want to be the guy that makes my career by winning three times in one season. I want to win as many tournaments as I can.

“I’ve used that momentum from last week and that was just a little taster of what the Ryder Cup would be like. That’s going to be 10-fold. Last week gave me more desire to put my name in the mix.

“Darren knows what I can do so I don’t think it was imperative (to play well here), but it bodes well when you do. It’s good to do it face to face. Since I first got out on tour he’s been a really good mentor to me and a good friend. It’s just lucky he’s the Ryder Cup captain.”

Sullivan is currently fourth in the Ryder Cup qualifying race and Clarke joked he could not rely on one of his three wild cards after the pair exchanged jibes all the way round.

“He is playing beautifully, really nicely,” Clarke said after a 70 left him on the projected cut mark of one under. “He is 10 under but he could be 14 or 15 because he is playing great.

“He is a quality ball striker. There are lots of brilliant young kids out here but not many of them move the ball both ways and with different trajectory. He does it all and I love playing with people like that. He is a proper shot-maker.

“He is such a great kid as well, such fun to play with and I really enjoy his company. He has completely taken the piss out of me for two days and I have told him if he keeps this up, a pick is out of the question!”

Asked how he replied to Clarke’s jokes about his height, the diminutive Sullivan added: “He’s got 60 on his ball (recalling his two 60s on the European Tour) and on the first tee I said I didn’t realise you put your age on the ball.”

McIlroy started his round with eight straight pars before a bogey on the ninth, where his pushed drive finished in rocks on the edge of a lake.

Spieth had already bogeyed the fourth and fifth and was lucky not to drop more shots on the same hole, his drive heading towards the water – on the other side of the fairway to McIlroy – before hitting a spectator and finishing in the rough.

The Masters and US Open champion found the edge of the green with his approach and left his birdie attempt inches short, but picked up his first shot of the day on the next to ease concerns about missing the cut in his first regular European Tour event.

Michael Hoey birdied two of his final three holes to card a three-under 69 and move to three under for the tournament.

1 Tipping Point: Eddie Jones’s rhetoric is out of place in a febrile political climate
2 Andy Farrell recalls 13 players to Ireland squad ahead of England clash
3 All in the Game: No Moore medals for Steven Gerrard
4 On healing and wild hurling: The re-education of Diarmuid Lyng
5 The Offload: James Ryan chuffed for Leavy and his new puppy
Real news has value SUBSCRIBE