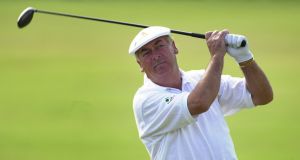 Ireland’s Christy O’Connor Jnr in action on the 2nd tee at the 2000 Open Golf Championship at St Andrews in Scotland. One of the biggest stars of Irish golf, has died. Photo: Rebecca Naden/PA Wire

There were a few embellishments to Christy O’Connor jnr, like the trademark white flat cap from under which his silver locks escaped. Always, too, there was his smile; or, on occasions, tears, such as flowed freely after that singles win over Fred Couples in the 1989 Ryder Cup at the Belfry. He was a man who wore his emotions on his sleeve, with nothing to hide.

And the measure of affection for O’Connor – who, aged 67, died on holiday in Tenerife – was apparent from the outpouring of sympathy and the volume of tributes paid to him on his sudden passing. From his fellow professional golfers to other leading sportsmen, from politicians to singers, there was uniformity in recognising the Galway man’s golfing achievements but also his decency as a human being.

“He was the life and soul of every party, ask anybody on tour and they will tell you the same thing. He would always be the one to get the party going if the atmosphere on tour was a bit flat. He was very dedicated to his family and loved them to bits . . . he was a great player and a great friend. He had a great life but I’m just sorry it went so quickly and so suddenly,” said fellow-Ryder Cup player Eamonn Darcy, who spent over two decades accompanying O’Connor on tour.

“When I first came out on tour in the early 1990s, guys like Christy, Darce, Jimmy Heggarty and Smythie [Des Smyth] were senior players and took me under their wing . . . they helped equip me for life on and off the tour. I was lucky to have had that time and have a great relationship with Christy, which makes this news all the harder to take.”

Darren Clarke, who will captain Europe in the Ryder Cup at Hazeltine later this year, also paid tribute. “Christy was a great role model, one of those players who mentored me when I first went out on tour and my sympathy goes to his family at this time,” said Clarke.

“[He] was a legendary figure and his immense legacy is far more than purely his playing record. He was a universally popular player and always enhanced every tournament he played, no matter the occasion. His infectious charm will be sorely missed,” said George O’Grady, who retired as chief executive of the PGA European Tour last year.

Shane Lowry, who grew up playing at Esker Hills, one of the courses designed by O’Connor, described him as “an absolute legend of Irish golf, [my] thoughts and prayers go out to his family.”

In messages posted on social media, former British Open and US Masters champion Sandy Lyle said “golf lost a great character and true gentleman of the game” and former Ryder Cup team-mate Sam Torrance described O’Connor as a “legend on and off the course”.

Gary Player described O’Connor as “a super golfer and a good friend who was taken too soon”.