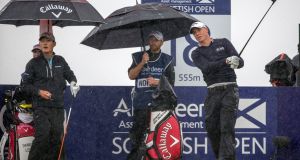 Sweden’s Alex Noren tees off on the 18th hole during day three of the 2016 AAM Scottish Open at Castle Stuart. Photograph: PA

Sweden’s Alex Noren will take a two-shot lead into the final round of the Aberdeen Asset Management Scottish Open after surviving miserable conditions at Castle Stuart.

Noren carded six birdies and two bogeys to sign for a 68 and double his overnight advantage, despite the strong winds of the first two days giving way to torrential downpours.

Former winner Graeme McDowell kept his hopes of a second title alive after a three-under 69 left him on eight under, bur a level-par 72 left Pádraig Harrington seven shots off the lead on five under.

Following the third round, world number 99 Noren said: “I have learnt that when you lead on this tour it’s not certain you are going to win but it would be a huge win for me. I would love to get a little higher in the rankings so I can get into the bigger tournaments so the scheduling is easier.

“I’m very happy. The last nine holes were very tough but at the same time the course played pretty much the same. Another course would have flooded.”

A victory on Sunday would leave Noren fractionally behind compatriot David Lingmerth in the battle for a place in the Olympics, but the 33-year-old added: “I haven’t really thought about the Olympics.

“We have four Majors and WGCs and great events and I’m so happy that we have so many good organisations that put up brilliant tournaments. So I think the Olympics has to do a pretty awesome job to stand up to a middle event on the European Tour.”

Hatton, 24, started his round with an eagle and two birdies in the first three holes and finished a 66 in style with birdies on the 17th and 18th to move into contention for a maiden victory.

“I’ve been close a few times and the first time being in the final group at Wentworth was a big thing for me,” said Hatton, who carded a closing 75 to finish seventh in the BMW PGA Championship. “I felt like I dealt with it quite well, just the putts didn’t drop that day.

“I had a really good run and then took two weeks off before Germany and I feel like I paid the price for that with a missed cut there.

“I did a little bit of work with my dad Jeff over the weekend and my swing felt a little better in France but still wasn’t quite right, so my dad came up this week and we did quite a bit of work on Tuesday and that seems to have paid dividends.”

Manassero was the youngest winner in European Tour history when he claimed the Castello Masters in 2010 aged 17 years and 188 days and added further titles in each of the next three seasons.

The last of those came in the prestigious BMW PGA Championship in 2013 and helped Manassero reach a career-high of 25th in the world, but the 23-year-old arrived in Scotland a lowly 596th after just two top-10 finishes since the start of 2014.

A change of technique in pursuit of more length off the tee was initially to blame for the slump in form, but Manassero admitted it then became a mental battle to rediscover the kind of form he demonstrated with a battling 68 which featured three bogeys, five birdies and an eagle.

Walters recorded three top-four finishes in his native South Africa at the start of the season, but had missed the cut in eight of his last nine events before this week.

“I was very sick during the Tshwane Open with some sort of virus and managed to play through it – don’t ask me how – and finished fourth,” the 35-year-old said after a flawless 65.

“I was really down and out the next three weeks but tried to play on and lost my way, lost a lot of weight and my swing. With that you lose confidence and then the cruelty of the game gets you.

“The last month and a half I have worked probably harder than ever on my game and my team have done a great job of getting me back on the straight and narrow.”

Walters, Hatton and Manassero are all chasing one of the four places in the Open on offer to players who finish in the top 12 and are not already exempt.

“In the Joburg Open I finished third and lost out via the tiebreaker of lowest world ranking,” Walters added. “I really had a feeling coming into this week, this is my last shot, and it would sure be nice to walk away with one of those spots.”