With GAA past, present and future joyously colliding, 2013 will be a hard act to follow

But, beginning with the death of Kevin Heffernan, a year of at times eerie historical resonance belonged to Dublin 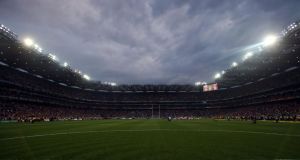 When it has acquired a bit of sepia in time to come, 2013 will be remembered as an extraordinary year for the GAA. A century after its purchase, Croke Park broke new ground by staging the first floodlit All-Ireland on an almost magical evening when David Fitzgerald’s Clare erupted through the twilight to capture a memorable All-Ireland, whose diptych of draw and replay will surely bear eventual comparison with the 1931 matches between Kilkenny and Cork.

History popped up everywhere during the sort of flaming summer we had all but forgotten existed. Limerick’s hurlers bridged a 17-year gap to win Munster and Dublin tripled that with a first Leinster since 1961, having brought down Kilkenny on the championship field for the first time in even longer.

Yet a year of at times eerie historical resonance belonged to Dublin, both emotionally and in terms of achievement.

The most obvious resonance came very early in the year when after a long illness, Kevin Heffernan passed away at the end of January. In a way he left at an apposite time with both Dublin and the GAA on the cusp of a great year but it was also poignant because he would have so enjoyed the months that followed.

Good health
Gaelic games in the capital are in a state of unprecedented good health and that vital presence in the country’s largest population centre is of huge importance to the GAA at national level.

It wasn’t always like that. By the early 1970s when Heffernan fatefully took over the Dublin senior footballers, the initial surge of dynamism from the revolution staged by his club St Vincent’s had waned. What he innovated and developed turned the situation around completely.

Dublin mightn’t accumulate All-Irelands at the remorseless rate Kerry have managed to sustain since the beginning of the last century but in 60 years of fielding native teams, the county has won nine Sam Maguires – a strike rate that over the period maintains its position as the Kingdom’s closest challenger.

Since Heffernan’s personal era ended with the All-Ireland final of 1985, Dublin have stayed for the most part there or thereabouts, sufficiently competitive to make their championship matches big events even when enduring long periods of not being quite good enough to land the ultimate prize.

That profile has helped to keep the flame lit in the city where the status of the GAA is unrecognisable compared to 40 years ago. Back then Gaelic games had virtually no reach on the southside of the city, where the games now have unprecedented penetration and has played such a major role in reviving Dublin hurling.

The important thing to note about the widely publicised agreement between Dalkey club Cuala and Blackrock rugby club isn’t so much the landed gentry are being forced to share their stately homes but that the GAA club, which already uses four other venues in the Dún Laoghaire borough so urgently needs a fifth.

Hard work by volunteers underpins the effort as it does everywhere but the sense of purpose and county pride was the consequence of Heffernan’s achievements.

‘He set out to win’
“He didn’t set out to make football popular in Dublin” said Pat O’Neill, who won All-Irelands as a player in the 1970s and as a manger in 1995; “he set out to win. Popularity followed but that wasn’t by design. It also redefined aspirations for players and teams for decades to come.”

That redefinition was acknowledged by Jim Gavin, the latest Dublin manager to win an All-Ireland. Ironically on the weekend of Heffernan’s passing the county suffered the first of what would be only two defeats all year – after extra-time in the O’Byrne Cup final against Kildare.

“We were all very saddened to hear of Kevin’s passing on Friday,” said Gavin afterwards. “We mentioned inside before the game the virtues and what Kevin brought to the game of football. He was a visionary, a strategist and those guys stand on his shoulders. Certainly I, and the guys there, wouldn’t be where we are in Dublin GAA without the vision of Kevin Heffernan.”

Gavin also became the first Dublin manager to win the Philips Manager of the Year award. It was a fitting tribute to someone who had had the courage of his convictions to redefine certain modern football preconceptions by prioritising the attacking dimension and introducing very young players.

A year ago today Páidí Ó Sé was laid to rest in Ventry. His untimely death didn’t take place in 2013 but became part of the year’s narrative when he and Heffernan were commemorated before the latest instalment of the fixture the lore of which they had both played such a major role in perpetuating.

‘Tomahawked in’
For all the essentially skewed nature of the Dublin-Kerry rivalry and the equally valid irritation that the matches only become “classics” when Dublin win, few could quibble with the spectacle: Kerry’s bewildering rapier work in the first half and how Paul Mannion’s exhilarating goal – according to Kevin McStay’s immortal phrase on RTÉ, ‘tomahawked in’ – kept Dublin on life-support.

As if in ethereal tribute the match turned into a reliving of its 1977 predecessor, right down to the late Dublin goals and sense of frantic abandon.

With the GAA’s past, present and future all joyously colliding, 2013 will be a hard act to follow.
smoran@irishtimes.com