Shefflin, Cooper and Neymar cast long shadows from which fledgling heroes must emerge 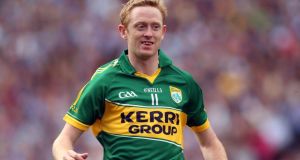 My colleague Ken Early suggested in the Irish Times yesterday that, as far as the Brazilian media were concerned, the injury to Neymar which has ruled him out of the rest of the World Cup was the worst thing to ever happen to the country.

Neymar is not just the best player on the Brazilian team. He is the face of the entire squad, the sole creative driving force, the first name you think of when you talk about the team. What’s been extraordinary has been the serene way in which he’s handled all that pressure for the last three weeks.

If a nation of 200 million people can put all their trust in one man, then you would think that the best footballer and hurler to come out of Kerry and Kilkenny in the last 20 years would be able to handle whatever extra attention comes their way.

Colm Cooper and Henry Shefflin have successfully borne the expectation of their respective counties over the course of their careers, and the serene way that they’ve handled that pressure, hints at an inner steel; it has made them the main men in their chosen codes, both locally and nationally.

Brazil have a World Cup to win now, without Neymar. And this weekend Kerry and Kilkenny had provincial finals to win, without their talisman. Brazil will hope that their players react in the same way as the Kerry team did. In Cooper’s absence, everyone raised their game.

James O’Donoghue realised he had to step up and become Kerry’s main man. He had an injury coming into the game, he was a little short of match practice, and he surely felt that he would be targeted by a Cork defence that would previously have been saving all their attention for Cooper.

Whether he thought about it on a conscious level or not, O’Donoghue knew none of that mattered. It couldn’t ever matter to Cooper that he was tightly marked, or that his preparation may have been undercooked or hampered in any way. When he took the field for Kerry, he had to perform. No excuses.

To respond in the way that he did, by hitting 0-10, with eight points from play, was beyond even O’Donoghue’s wildest dreams I’m sure but that doesn’t set a bar for him to try and reach every time he plays for Kerry now – Cooper set that bar pretty high twelve years ago, and O’Donoghue knows that’s the level he has to aspire to.

For Kilkenny it’s a slightly different situation. Shefflin is still around, of course, and they have had the luxury in recent weeks of being able to introduce Shefflin at key moments towards the end of the game, most notably when he hit that last minute point against Galway that looked to have won it for them the first day in Tullamore.

In 2012, Kilkenny were hopelessly dependent on Shefflin. At the time, with Shefflin heading for his ninth All-Ireland medal, it was crazy that Kilkenny were depending on him more that year than perhaps they had ever previously done.

The idea surely when you win nine All-Ireland medals is that you’re good enough to be the decisive factor in the first five or six, and that your team-mates win you the last three.

Shefflin inverted that completely – looking back from the vantage point of the 2012 All-Ireland final replay, the longer he went on, the more important he seemed to get.

They looked a tired team throughout the championship last year, and an injury-hit Shefflin in the end wasn’t able to pull them through as he had been able to 12 months before.

Kilkenny have had plenty of big characters in the backline over the years, but from midfield up, Shefflin was the sun, and the supporting cast were the moon – capable of illuminating an occasion from time to time, but it was a reflected light they were shining.

Did Shefflin’s red card against Cork last July finally bring it home to these Kilkenny players that they were at some stage going to have to live life without him? Either way, Richie Hogan, Colin Fennelly and TJ Reid in particular have stepped up to the challenge.

Reid is a clubmate of Shefflin’s in Ballyhale, and so has spent his entire career operating in his shadow. The idea out there may be of Reid as a callow youth, thrust into the spotlight... but this is the thing about this Kilkenny team.

Reid is 26 years old. Richie Power is 28. Eoin Larkin is 30 next week. They have spent their whole careers being second (or third, or fourth...) banana to Shefflin.

For TJ Reid, and for James O’Donoghue, and for Willian or Ramires or Hulk 6000 miles away, the time has come to step out from the shadows and take on the mantle of being the main man – three communities hopelessly in love with their sports, demand it.