Seán Moran: GAA needs to act fast and decisively or amateurism is over 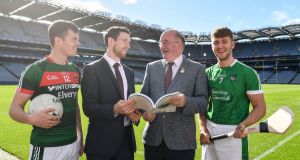 Stephen Coen of Mayo, Seamus Hickey of the GPA, GAA president John Horan and Shane Flanagan of Limerick at the launch of the report. Photograph: Sam Barnes/Sportsfile

For something as ground breaking as the detailed research that went into the ESRI report Playing Senior Inter-County Games: Experiences, Realities and Consequences, there was a sense of deja vu about some of issues raised.

Elish Kelly’s thoughtful summary of the findings included a number of suggestions about how these issues might be addressed but at that point those of us who have seen other excellent reports come to nothing, certainly in the short term, there was a slight raising of the eyebrows.

For instance the ESRI found that 40 per cent of players surveyed – with no appreciable difference between football and hurling – had literally no time off during 2016. That sounds impossible but the ad hoc nature of club schedules in various counties means that players are never entirely sure when the season’s demands are going to conclude.

You get daft extremes like club finals on St Stephen’s Day because of the knock-on effect of a county’s championship run, but the random nature of local fixture-making has been highlighted by the Club Players Association.

Yet anything with a local angle generally results in a throwing up of hands in Croke Park. Attempts to introduce a rigid close season came to nothing in the past 10 years simply because of some county managers’ disinclination to observe the new rules and the GAA’s tacit acceptance that short of roaming the country with torches, there was nothing that could be done.

Association president John Horan touched on the problem of managers and their influence over county administrators, but in his own comments on the report he hit on a potential solution.

It was ironic to hear David Nucifora’s role with the IRFU so enthusiastically promoted when it has proved quite controversial in rugby circles, but that controversy is part of the territory.

For a player welfare supremo to take charge in Croke Park with a national remit would require two things. There would have to be a bullet-proof equivalent in each county, someone unafraid of the county manager and not biddable in the face of political pressure, who would make the hard calls in respect of use and overuse of players.

Séamus Hickey, chair of the Gaelic Players Association, summed up the role with great clarity: “Someone who’s a permanent part of the county board in this instance, who is immune to the see-saw of new managers and new philosophies and is that steady eye on practices that exist within the county.

“There is definitely a role for that person.”

Finding 32 of those would be a start, if also a fair old challenge.

Secondly, the supremo would need to be every bit as robust as Nucifora in taking flak and not backing down, as special interests would mobilise themselves up and down the country.

This report is a milestone for the GAA. It may be, as Elish Kelly put it, “a snapshot” of the county game in 2016 but it is a good likeness. If measures cannot be taken to alleviate the pressures – on career, family and social life – Gaelic games are headed in one direction: professionalism.

How else can you slice the figures that show county players are spending nearly as much time on their notionally recreational activities as they are on their careers?

Not only that, but the areas that take the strain in this capsized work-play-life balance are personal relationships and sleep patterns, which have been found to be significantly inadequate for elite-level athletes.

Eamon O’Shea, the former Tipperary hurling manager and NUIG academic, who was on the oversight committee for the report, drew a stray laugh in his response when saying that because of the substance of these findings he never objected if players at the back of his video analysis needed to sleep instead.

John Horan further elaborated on what is a growing phenomenon: the tendency of players to choose careers that facilitate playing for the county rather than their own professional development.

He was aware of players who decided to be teachers simply because the hours suited the demands of county teams and that they would move on as soon as they pulled off the county jersey for the last time. Furthermore, he referenced players who were compromising their career path in order to play an amateur game.

Then there are the numbers – about 30 per cent – simply walking away from the county scene every year, some for personal reasons but others for games-related matters such as injury and, tellingly, 22 per cent because of “no chance of success”.

We shouldn’t lose track of the positives in the report and the enjoyment that such a large number – 83 per cent – get from their involvement, but O’Shea summarised the challenge.

“In the GAA, opinion is often valued more than evidence. We need to use this information wisely. There’s a lot to think about.”