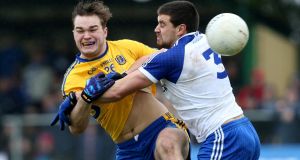 Roscommon’s Ultan Harney in action against Monaghan’s Drew Wylie on the opening day of the league season – the Connacht side’s only defeat. Photograph: Andrew Paton/Inpho

The draw for this year’s Connacht championship makes a provincial final between holders Mayo and Roscommon a possibility but the rivalry between the counties is already in full spate. They are due to meet in the Eirgrid Under-21 Connacht final on Saturday week but more pertinently they meet on Sunday in Dr Hyde Park in the penultimate round of this year’s Division One schedules.

Ultan Harney will hope to play a significant role in the championship encounters.

Back from a protracted hamstring injury in time to face Sligo in the Connacht under-21 semi-final, he is now looking to the final, as well as regaining his place on the senior team, which has been the revelation of this year’s league.

Playing fast, attacking football under the new joint-management of Kevin McStay and Fergal O’Donnell, Roscommon have stormed this season’s Division One. After losing their opening match against Monaghan to a late goal, they have gone on a winning streak, beating Cork and Kerry away, as well as Down and Donegal.

As fate would ordain it, the match against Mayo this weekend sees the multiple Connacht champions in desperate need of points to ensure that they survive in the top division.

Adding to the intrigue is the fact that McStay was overlooked for the Mayo manager’s position at the beginning of last season in favour of the Noel Connelly and Pat Holmes combination that was controversially pushed out after a year by player representations.

“The Roscommon people and those in media are bringing that up,” says Harney, “but he hasn’t mentioned it at all. He’s created a great buzz: the support at all the games – in Kerry and Cork, Ros supporters outnumbered the home supporters, which was great to see.”

So, there’s a lot at stake and Harney believes that Sunday could redefine the rivalry between the neighbouring counties after a period in which Mayo have been indisputably the top team in the west.

“If both teams were safe, it might have no significance but the fact that Mayo are fighting for survival means they will come with everything. It will be a big test.”

It’s been an eventful few months for the Roscommon forward, who played in last year’s qualifiers, played in his club Clann na nGael’s first county championship win in 19 years, and reached the Sigerson final with DCU only to pull up with that hamstring injury before the start.

He says that he hasn’t been as astonished as the public at large by Roscommon’s surge to second place in the league even if he hadn’t entirely expected it.

“I always felt for the last year or two, and last year when I was involved, that we have the players. From playing against lads at minor the last couple of years I couldn’t see how other teams could be so much better than us – I was thinking that we just need to get it together.

“I am surprised – I suppose we were hoping just to stay up and fight. We knew it was going to be tough but I suppose we didn’t see it panning out the way we are now, sitting second in the table. But then again, I’m not surprised in a way. I know we’re capable of being where we are.”

Roscommon’s change of management raised a few eyebrows, even if not on the scale as Mayo’s. John Evans had led Roscommon to successive promotions but didn’t survive a disappointing summer.

Harney pays tribute to Evans and pinpoints where he believes the new management has concentrated its efforts.

“In fairness to John Evans, last year you couldn’t fault training or anything but this year we are doing a lot more physical work. You see the Dublins, Kerrys, Mayos, Donegals: their intensity levels are up at a higher level so we knew going into the year that the level we’ve been at the last 10-15 years wasn’t enough to be competing.

“I think having good forwards in Division One is massive. I was talking to Paul Curran [former Dublin All-Ireland winner], our club manager, and he said the reason he sees us staying up is forward power.