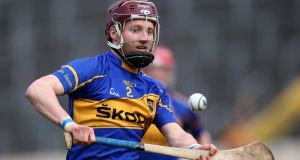 Tipperary defender Paddy Stapleton: “I think I might be ready for training next week, hopefully.” Photograph: Inpho

It ended up like two sloppy boxers trying to land the last punch before they both fell to the canvas, although no one watching from Tipperary is laughing at the events in Limerick hurling this week.

Indeed Tipperary defender Paddy Stapleton reckons Limerick may well be strengthened by the resignation of co-manager Donal O’Grady and his subsequent spat with the county board: Tipperary should at least be concerned as they are set to play Limerick in the Munster championship semi-final on June 1st.

‘Positive effect’
“What’s happening in Limerick, and what you often see with management coming in and out, is that it can have a positive effect as much as anything,” says Stapleton.

“You see that with soccer teams a lot. They change the manager and get a big reaction. So from our point of view it changes nothing. They still have one half of the management team that was there (in TJ Ryan), and I’m sure there’s not going to be much of a change.

“The last two years we’ve met Limerick in the first round. They should have beaten us the first year, and did beat us last year. So we can’t afford to be any way complacent. Their league wasn’t going fantastically for them, and maybe a shock like this is what they need to get things going again. But the championship is where it’s at.”

Tipperary have other things to worry about first, including the Allianz Hurling League final against Kilkenny on Sunday week, although Stapleton also admits Limerick are well capable of turning a disappointing end to the league into a good championship run:

“It’s probably a good sign of a team that the league hasn’t been going fantastically for them the last couple of years, but they were really at the races for the championship.

“I think that’s a great sign of players. When they’re needed most, they’re able to play at a high level. They have some great players, players that would make any intercounty team. We know that, and that’s why people shouldn’t take them lightly but, certainly, not ourselves.”

Indeed the fact none of the Limerick players have yet to speak out about this week’s crisis suggests they’ve already moved on:

“It’s up to them to keep it in-house and I think they’re right to do that. The sanctuary of the dressing-room is very important. Anything that happens there, people have to be protected.

Stapleton is in a race against time be fit for the league final in Thurles as he’s still recovering from a chipped bone in his right wrist, sustained in the warm-up for the league game against Kilkenny in February.

Massive improvement
“I think I might be ready for training next week, hopefully. It was sore for a few weeks, so I mentioned it to the physio and went for a scan. There was a bit of a chip on the bone but this week has seen a massive improvement, after I rested it - that’s all it needed.

“Hopefully now I’ll be back next week but the league final is probably coming too soon.”

Kilkenny forward Eoin Larkin has also confirmed he too is battling to be ready for Sunday week as he’s nursing a ligament strain in his left wrist, although he is likely to feature at some stage, if required.