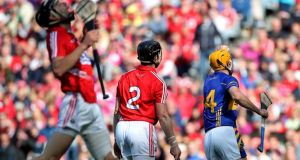 I can pinpoint the exact moment when my club Milltown were going to win the Galway senior football championship of 2009.

We had had a brilliant training session on a Sunday morning at the height of summer. After the session had ended, we decided it was time for an impromptu dip in the river Clare, which runs behind our main pitch.

We could see our beautiful little village a couple of hundred yards upstream, spirits were high, we were playing great football . . . and I remember thinking; ‘this is it, this is what it’s like to be part of a winning team. I’ll be retelling this exact moment to people in years to come.’

The one slight fly in the ointment of course was that, instead of winning the county final, we were dumped unceremoniously out of the championship at the quarter-final stage by Salthill-Knocknacarra in a game in which we had three men sent off, including me.

And it turns out we had just been a bunch of idiots standing in the middle of a river trying not to drown each other.

If you’ve ever played on a team, then you’re curious about what makes a really successful one tick.

If we cast our minds back 12 years to the start of Joe Kernan’s reign as Armagh manager there was an endless fascination with what he had created.

To those of us on the outside, he and his captain Kieran McGeeney had created an environment that was half-football team, half-cult.

As it turns out, Armagh had a lot of good footballers at the time, and had been beaten by the eventual All-Ireland champions in each of the previous three years, but the idea that the secret to a great team could be found in a wrist-band, or a logo on their jerseys, or a dressing room speech at half-time, was far more alluring.

The feeling in that Cork bus as it made its way to Croke Park on Sunday may well have been that for the first time under Jimmy Barry Murphy, they had cracked it.

They had won the Munster final, they had proved themselves to be an excellent team, maybe the best we had seen in the championship so far, and they had gotten to that stage where they could just play the game on its merits and expect to win.

The progression from 2012, to 2013, to 2014 was clear. Calmness, confidence and composure were now Cork’s best friends. Cue calamity. Actually, calamity isn’t the word either – it was a slow, inexorable unravelling across the pitch, with Patrick Horgan, Daniel Kearney, Aidan Walsh, and Shane O’Neill powerless to stop the slide.

It was obvious afterwards that JBM had no idea where that performance came from, but the look on his face suggested that he had once again been reminded of the basic unknowability of how a 30-legged organism like a hurling team operates.

The feeling in the Tipp bus going up Jones Road may have been slightly different of course. The thought may even have occurred to some of the players or management that if Galway were capable of defending a six point lead for 19 minutes, Tipperary wouldn’t be in this situation, and Eamon O’Shea would still be waiting for his first championship victory as manager.

Tipp played like a team that had a nagging doubt about their own ability – just the right amount of doubt, and that can be an extremely effective motivating tool.

James Woodlock was interviewed on RTE radio moments after the final whistle and spoke about how he and his partner Shane McGrath had felt slighted in the build-up by everyone lionising the Cork midfield.

Whether it’s Joe Kernan’s speech at half-time of the 2002 All-Ireland final, or Rob Kearney standing up in a hotel room in Enfield before the 2009 Grand Slam and calling out his Munster team-mates for not trying hard enough in a green jersey, we’re obsessed by the grand gesture that makes a group of individuals a team.

The perfect team dynamic doesn’t exist, and neither does that one unifying moment – that panacea for every dressing-room problem.

If Galway had managed to hold onto that six point lead, it wouldn’t have meant that everything Eamon O’Shea had done up to that point was wrong, he just wouldn’t have had the chance to prove otherwise.

Trust what you’re doing, and try not to pinpoint the one single act that makes the difference; it will more than likely be a thousand small things done just a little bit better.