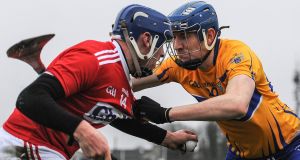 A goal by substitute Colin Guilfoyle two minutes from the end of normal time set up victory for Clare in Round One of the Munster Hurling League.

Played at Cusack Park on Saturday in front of a crowd of 1,987, the game was dominated for the most part by Cork - but a late flurry of 1-3 from the home side was enough to see them take the spoils.

Guilfoyle’s goal left one point between the sides (0-21 to 1-17) and when Niall Deasy landed a free from his own 65 in injury-time, the teams were level for the first time in the game. Clare then added two extra-time points through Ryan Taylor and Diarmuid Ryan to claim the win.

Cork had the better of the exchanges in the opening half, going in 0-13 to 0-7 in front at the interval. The Rebels found themselves three points to the good early on, with scores by Jamie Coughlan, a free by Declan Dalton and one from play by Cormac Murphy.

Clare got off the mark with a Niall Deasy free on nine minutes but had to play second fiddle to a hungrier Cork before the break. But when they returned, the hosts hit four unanswered points inside three minutes. Deasy immediately landed a free from halfway followed by good efforts by Diarmuid Ryan, David Conroy and Cathal Malone.

However, the visitors kept their opponents at bay. A Deasy point from play after 59 minutes reduced the deficit to one point but Cork replied immediately through Ronnie O’Flynn.

Coughlan and O’Flynn once again appeared to have the visitors on their way to a deserved triumph with further scores, but they were to be Cork’s last.

However, a defiant Clare pulled it out of the bag at the death.