Mixed views on Sky deal amongst GAA officials in Britain 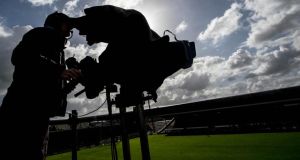 “Our development officer when he goes into schools finds it a lot easier to talk about the games because he can say it’s on Sky, the same television station as Premier League football and that gives exposure to the games and their value.” Photograph: James Crombie/Inpho

There are mixed views on the Sky Sports deal for followers of Gaelic Games in Britain. Three of the county secretaries in England have spoken to The Irish Times about the controversial allocation of television rights, which is expected to be discussed at tonight’s opening session of the GAA’s annual congress even though a motion calling for the abolition of exclusive rights for subscription television was not allowed on the weekend’s clár.

All seven county secretaries in Britain (London, Hertfordshire, Lancashire, Yorkshire, Warwickshire, Gloucestershire and Scotland) were emailed, four replied and three made time to discuss the issue.

Although there are reservations about the additional cost to audiences of the more expensive subscription and the need to take both Sky and Premier (the previous exclusive rights holder) if a supporter wants to see all matches during the summer, the arrangement with Sky is also seen as having benefits.

“To get on the Sky platform is £35 a month whereas Premier was a tenner. Most of the GAA people would probably either watch the game online – there’s a good few have GAAGO. At the moment they’re watching the league games and even myself yesterday, I didn’t know the Sigerson was on until I turned on GAAGO. That’s a great platform.

“Most people are wired up now or know someone with access to computers. I don’t think it does necessarily have to be on traditional television stations.

“Most of the club members I know would either prefer to get GAAGO or they’re not necessarily getting Sky; they’re getting something like Now TV (a Sky internet television service), which allows you some access to Sky as well. If there was a game they wanted to watch they get the weekend or daily package and watch that.”

“For years the Gaels here in Britain and probably further abroad have been starved of access to view our games,” he said, “and the fact that we have the games on Sky now is a long overdue bonus. The positive vibes from non-GAA and GAA people who have watched the games has been excellent and I’m sure in time it will help promote the games to new people. The process may take a few years but it needs to be captured and built upon rather than knocking it.”

London secretary and inter-county footballer (the first overseas player to receive a Player of the Month award) Mark Gottsche says that attitudes to Sky reflect the age of the audience.

“It’s fairly mixed. For a lot of the older generation, who would have Sky in their houses they enjoy it. For younger people my age, who wouldn’t have Sky in the house they’d be going to pubs to watch the games anyway. It all really depends on the age bracket.

“Then again if younger people are going to watch the game they’re probably going to have a couple of pints in the pub. The whole production thing doesn’t hold as high a value as actually seeing the game itself because if you’re in a public environment there’s going to be noise anyway.”

He believes that the broadcasting by Sky has helped raise the profile of the games amongst the local population in London.

“Yeah, definitely. If you’re talking to non-Irish and you mention the games they will say, ‘oh I’ve seen that on Sky Sports’. I know our development officer when he goes into schools finds it a lot easier to talk about the games because he can say it’s on Sky, the same television station as Premier League football and that gives exposure to the games and their value.”

“A couple but not I’d say a huge amount. You might get an email from someone who’s seen it and asks where the local club is. If they ever go any further than that, I don’t know.”

From his experience Frank Dillon is more emphatic in dismissing any such link.

“The other thing we’ve been hearing an awful lot about over here is how Sky has been responsible for people queuing up for clubs. I haven’t seen that at all. Nobody’s come up to our club or any of the other clubs I know and said, ‘oh, I watched this game on Sky and want to get involved’”

Fergal Kiernan believes however that the impact of the games’ availability on Sky will increase in the future.

“In Lancashire we see the Sky deal as a positive thing for the promotion of our games here in Britain and further afield. The feedback about the games on social media from non-GAA people has been very positive and I think viewing numbers will increase over the next few years and interest from adults and children in taking up our games will increase as well.”