Kerry step up their pursuit of excellence

New training facilities worth €5.8m being developed in the Kingdom 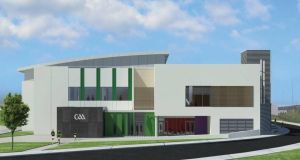 The proposed Centre of Excellence at Tralee IT. 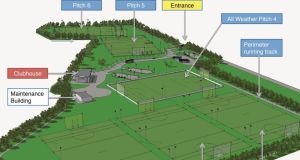 The site plan of the Kerry GAA training facility at Currans.

Work on the €5.8 million project, which is actually split between two locations at Tralee IT and Currans, near Farranfore, is already well underway, with a further €1.1 million now required before it can be completed.

It is hoped that a major fund-raising event in New York next Thursday will provide a large chunk of the balance.

All 400 seats at the New York Plaza have been sold (at $1,000 a head), and among the long list of items to be auctioned is a portrait of Mícheál Ó Muircheartaigh (by renowned Kerry artist Liam O’Neill), a box of comedy highlights signed by Denis Leary (who has Kerry roots), and also a series of flags mounted and signed by Rory McIlroy.

“Winning the Sam Maguire Cup should be a big help in fundraising this year, as it gives the effort more gravitas,” says Kerry manager Eamonn Fitzmaurice, who has also highlighted the county’s need for a proper modern training base.

There are currently only five floodlit pitches in Kerry, and with more kids playing per head of population than in any other county, and 73 Gaelic football clubs, the need for such a facility is greater than ever.

The Kerry County Board has already staged similar fund-raising events in Boston, Chicago and London, this spring, and after the New York event, hope to have secured 85 per cent of the €5.8 million required.

Croke Park, the Munster Council and team sponsor Kerry Group have each donated €1 million; Friends of Kerry pledged €700,000 and the National Lottery gave €300,000.

Work at the 48-acre Currans site – which will have six pitches, all floodlight – has already begun, and will be completed by the end of 2016. The Tralee IT facility will have one floodlit playing field, plus various coaching offices, etc.

“We’ll be able to expose players to high standards at as young an age as possible,” says Fitzmaurice, “and move them through the ranks with the best coaching and facilities. The state-of-the-art training facilities will inspire them to take the sport seriously.”

Former Kerry footballer Pat Spillane believes that despite all the tradition in the county, Kerry have fallen behind in football facilities.

“Kerry footballers are skilled, we have a huge tradition, but we took our eye off the ball for several years,” says Spillane. “We assumed there was a conveyor belt of talent coming through, but the game has moved on. It’s all about coaching and development now. The new facility will lay the foundation for the future.”

All of which can only contribute further to that embarrassment of All-Ireland football riches.