NUIG left to rue a strong of missed chances at Dangan 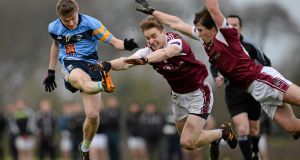 UCD, backboned by Dublin stars Jack McCaffrey, Michael Fitzsimons and Paul Mannion, were made fight all the way before they booked their place in the quarter-finals of the Sigerson Cup.

Indeed, NUIG will reflect on a string of missed chances which cost them dearly in a game where they were more than a match for the favourites at Dangan.

But Westmeath’s John Heslin was the difference between the sides and his haul of 0-7, four of them from play, was the decisive factor in a decent contest played in reasonable conditions on the banks of the Corrib.

NUIG, thanks to a goal from Antrim’s Owen Gallagher after a well-worked move, led by 1-3 to 0-3 at the interval, having played with the wind.

Heslin took over after the restart and kicked three excellent points to level the match before Barry O’Sullivan edged them in front from distance.

Peter Cooke responded with a couple of good points for the Galway college before Heslin and Mannion, who had earlier been denied by a good save from NUIG goalkeeper Donie O’Sullivan, restored UCD’s lead and they held on to the finish as the home side squandered a few good chances late in the match.