In two codes Galway offered some great things, and also exposed some of the same old problems 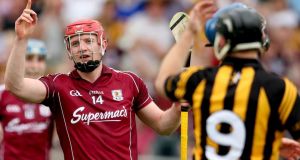 Manny Ramirez is one of the most colourful characters in the last 20 years of Major League Baseball.

He led the Boston Red Sox to world championships in 2004 and 2007, but on top of that he became one of the best known players in the league due to his rather off-beat humour and lifestyle. His whole approach to life was summed up by one phrase that followed him around for his entire career - it was just “Manny being Manny.”

It was a phrase that described a multitude, good and bad, including a performance-enhancing drugs violation. Huge clutch plays, stupid off-field pronouncements, World Series MVP awards, basic fielding errors - all could be filed under “Manny Being Manny.”

This last weekend was perhaps the perfect encapsulation of Galway Being Galway. In two codes, live on television, we saw two almost maddening performances which showcased some great things, and also exposed some of the same old problems, of my native county.

I went to Sligo for the Connacht semi-final on Saturday evening, and was impressed by Galway’s speed, their ability on the ball, their skill-set, but it all came with a huge caveat - Sligo were terrible on the night.

They showed no spirit, no desire to try and set the tone of the game, and looked rusty in many of the basic elements of the game. At a ground where Galway have gotten plenty of big scares, even when we were winning All-Irelands, it was a very weak challenge.

Nevertheless Galway should be happy with the midfield dominance of Tom Flynn and Fiontan O’Curraoin, two men with two All-Ireland under-21 medals in 2011 and 2013, and with the pace and artistry of Shane Walsh and Danny Cummins up front, who scored 0-10 of Galway’s final tally of 0-16.

Walsh is a prodigious talent, a guy who perhaps first came to prominence playing in the 2011 Hogan Cup final for St Jarlath’s of Tuam, when he was taking frees off the ground with his left and right foot.

He’s young, he’s entirely unpredictable, he’s a joy to watch... and he’s got a big target on his back.

I can see James Horan now, keeping Keith Higgins locked up in a cage, denying him red meat, and telling him terrible things Shane Walsh is reported to have said about his pet dog. By the time the Connacht final comes around, Higgins will probably be frothing at the mouth himself.

Unfortunately the game on Saturday evening was a petri-dish example of the sort of game Galway are now capable of winning. In a game as polite as that, Galway can always be fancied. It’s when things turn a little nasty that we haven’t been able to provide an answer in recent years.

Our two young midfielders are raw, but they’re talented. A Connacht final in Castlebar is a big step-up from Under-21 All-Ireland finals, and a “No, I insist, after you” kind of evening in Sligo.

Danny Cummins gave Cork plenty of problems in Croke Park last year before injuring his hamstring - is he ready to take a provincial final by the scruff of the neck? And is our backline ready to right the wrongs of Pearse Stadium last year? Galway being Galway, a facile win created more questions than answers.

While we’re at it, Galway Being Galway is about the best explanation I’ve heard for what happened in Tullamore last Sunday afternoon. I never envy people who have to make bold predictions in print or on-air at the best of times (and this World Cup has made fools of many people, such as myself, who normally don’t need any help in that area), but it’s at another level now for Galway hurling games.

League form that is either very good or very bad are two immediate red flags right off the bat. Rumours of in-fighting in the camp should weigh heavily in Galway’s favour. I’d have a lot of respect for a journalist asked to file 300 words of a preview writing instead - “Galway. I had a dream last night.” Or “My tea-leaves say Galway by three to five points.”

With other counties you can say reasonably reliably that they will bring aggression to the table, or that they’ll stay with you for 40-50 minutes before fading, or that a good league campaign will lead to a productive summer. Galway appear to be on a one-team mission to play well for the least amount of games in a 15 year period while still remaining relevant.

It turns out that if you beat (or draw with) Kilkenny once every five or six years, people are going to take you seriously, no matter how bad other results have been. Galway have a replay to look forward to, of course, courtesy of Joe Canning, but are we any closer to knowing what we’re going to see on Saturday evening in Tullamore? The answer, of course, is a definite maybe.