Improved discipline a long-standing aspiration for the GAA 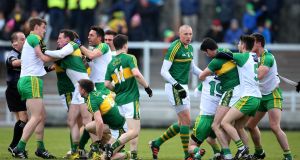 One of several unseemly incidents between Kerry and Donegal players during last weekend’s clash at Austin Stack Park in Tralee. Photograph: Cathal Noonan/Inpho

George Santayana, the Spanish-American philosopher, coined a phrase that has tended both to overshadow his other writings and survive in a variety of paraphrasing that takes it out of its intended context.

“Those who cannot remember the past are condemned to repeat it,” is the original quotation from Reason and Common Sense, published in 1905.

This is a significant year for the GAA. On Thursday of this week the association will announce details of its plans for commemorating the centenary of the 1916 Rising.

Congress has already – finally – taken steps to address burnout and the plague of multi-eligibility. On a broader front, a committee is currently at work, intending through consultation to anticipate the challenges awaiting the organisation in 2034, its 150th anniversary.

Speaking to this newspaper shortly after the committee was appointed, its secretary Kevin Griffin outlined the remit: “The place of the GAA in Ireland with Irish people in an increasingly heterogeneous society: what is that place, in the parish, in rural and urban communities. These are big questions. Is the GAA prepared for the changes: is it just reacting to them or is it planning? Will it be fit for purpose farther down the line?

The deliberations will be interesting because there is a sense that the country is changing more radically than ever before.

GAA history however indicates that just because problems are identified doesn’t mean that they will be addressed.

This week has seen the 50th anniversary of the blowing up of Nelson’s Pillar in 1966. On Wednesday 9th March, as the citizenry came to terms with this, the annual report of the GAA’s general secretary Seán Ó Síocháin was released. Five decades on it still makes for interesting reading.

One passage that will appear strange to contemporary readers is the clearly stated distrust of “celebrity” within the games.

“The glamorising of certain key players, even though it is done with the best of intentions, creates a problem, as it tends to engender enmities and tensions among the less favoured players and thereby causes estrangements and deterioration in team spirit . . . anything that aims at setting particular players apart should be discouraged.”

The late Paddy Downey, formerly Gaelic Games correspondent in this newspaper, once recounted how when he met with Ó Síocháin five years later in 1971 to discuss the possibility of an official All Stars scheme, the latter was not immediately all that convinced by the merits of the idea. Reading the above perhaps indicates why.

In the 1966 report, Ó Síocháin suggested that the anniversary of the Easter Rising could be marked by the GAA rededicating itself to discipline and the values of sportsmanship. The anniversary, he hoped, would result in a resurgence in national thought and action, which would also impact on the GAA.

“It must be conceded that our games have not been utilised to their full potential in character building and instilling a proper spirit of sportsmanship, since . . incidents have resulted in some of our games falling far short of the standards we ourselves have set.

“Nineteen sixty six should therefore, be the year in which we reaffirm, in accord with the letter and spirit of the rules of the Official Guide, our standards of approach generally to the games and our standards of conduct when playing them.

“It must the personal responsibility of every official commencing with the man who organises a juvenile team, to emphasise the vital importance of sportsmanship at all times and the absolute necessity, as a disciplinary measure in character building, of obeying the referee . . . .”

We know how that worked out.

Last Sunday at half-time referee Eddie Kinsella had to reprimand both Kerry and Donegal for their behaviour in the first half of an ill-tempered league match in Tralee, the latest in the dismal catalogue of such events that have showed little sign of taking on board Ó Síocháin’s plea – or the many echoing ones of his successors – for better discipline.

“It must be the personal responsibility of every player to regulate his performance in accord with the letter as well as the spirit of the rules and it must be his personal responsibility, as a Christian, to respect his opponent as a fellow human being and to refrain from any deliberate act, which could injure that opponent or lower his own dignity.

“It must be restated that ‘playing the game’ is far more important than winning it. In this, there is a challenge to be met – a challenge worthy of the status and dignity of the Association. Somewhere, somehow a new beginning must be made and I know of no better way to launch a crusade that will redound to the credit of the association and certainly there is no better time.”

What is particularly interesting about this report is the manner in which it wants to encourage an attitude of trying to do better and improving standards of behaviour as an appropriate way of commemorating the Rising. Fifty years on and there would still be few better ways of commemorating the centenary.