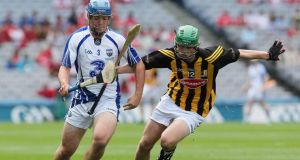 Waterford captain Kevin Daly is one of five players who could complete an All-Ireland colleges and All-Ireland MHC double. Photograph: Lorraine O’Sullivan/Inpho

With objections and technical flaws shouldered over the sideline, Mattie Murphy leads his latest gang of Galway teenagers into the Croke Park arena tomorrow.

Murphy’s record as a mentor of minors is so astonishing it deserves retelling. Since 1992 Galway have reached 15 All-Ireland finals and won eight. Despite two brief stints as senior manager, Murphy’s fingerprints are all over these captures of the Irish Press Cup. Galway’s dominance of the under-18 age grade remains the great enigma, in that they consistently fail to transfer it into senior success.

Maybe their pathway to silverware has something to do with that.

Gulf
Waterford have played seven championship matches since April, technically winning only three, losing two, drawing the one with the All-Ireland quarter-final against Antrim being abandoned.

(Having taken into consideration the gulf between the teams, Antrim opted not to seek a rescheduled tie and forfeited the result.)

Before that Waterford had lost to Tipperary, beaten Clare and Cork after extra-time before losing to Limerick in the Munster final replay.

But the quality of these Déise teenagers cannot be questioned. Proof being the 2-12 to 0-16 defeat of Kilkenny in the All-Ireland semi-final.

Galway men may be embedded in Leinster since 2009 but the minors needed only two outings to be hurling in September. Granted, they had to see off a decent Laois side and then Limerick, in a thrilling and controversial encounter that also required extra-time.

Select group
Both line-ups are unchanged from their semi-final conquests. However, Waterford manager Seán Power has shifted DJ Foran from wing to centre forward as Michael Kearney comes out the field. Also, chief marksman Patrick Curran (2-46 so far) lines out at full forward with Adam Farrell switching to the corner.

History supports Galway as Waterford have not won this title since 1948 but this bunch are on the cusp of achieving a double that would put them among a very select group.

Roscommon keep up their bid for return to the top flight 17:59
Mayo left licking their wounds as Monaghan roll on 17:47
Corbett helps Laois edge over the line in Ennis 17:45
Real Madrid forward Eden Hazard faces lengthy spell out after breaking ankle 17:41
Ireland suffer Twickenham torture yet again as England dominate 17:37
Crossword Get access to over 6,000 interactive crosswords