Tipperary roll Clare over and set sights on Kilkenny 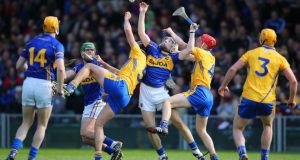 Clare’s Brendan Bugler and Jack Browne and Niall O’Meara of Tipperary battle for possession during the Allianz Hurling League Division One semi-final at the Gaelic Grounds in Limerick. Photograph: Cathal Noonan/Inpho

After the searing flames of 2013, a Tipperary and Kilkenny league final feels very old world indeed.

That’s now slated for Sunday week with the venue to be confirmed shortly but the suspicion is Kilkenny will happily march over to Semple Stadium after last year’s decider was at Nowlan Park.

But, all told, it was fairly drab viewing of hurling’s finest in Limerick today. Shooting practice by the end here.

It lacked the compelling elasticity that only comes with Championship. That earth trembling intensity.

All that comes later. Maybe in the Munster final.

You would worry for Séamus Callanan. Flawless hurling in April doesn’t always hold into early autumn. But flawless he is at the moment – 0-12 in total with eight points in the opening stanza was nothing short of sublime. Even when he made a mistake, lifting a free too far from his body, he readjusted and the sliotar floated between the posts.

Davy Fitzgerald was livid throughout on the sideline. The Clare manager let off a good few roars at Cork referee Colm Lyons and theatrically applauded when the All-Ireland champions were awarded a free.

But they got what they deserved. Clare were in pursuit from the opening seconds when Bubbles O’Dwyer pointed.

Cathal McInerney’s goal did momentarily nudge them ahead but Tipperary responded with four points in an otherwise flat opening quarter. Darren Gleeson actually made a fine save from McInerney’s initial shot but the rebound was bundled into the net.

It’s hardly news that Clare are a small, skilful hurling side but it looked it for much of the first half as Tipperary hovered up the dropping ball.

Callanan was superb but it was Patrick Maher’s thunderous run onto loose ball and low finish past Donal Tuohy that saw them burst clear. James Barry got a point from miles out while Noel McGrath raised a white flag as well with an impressive catch and strike.

Clare were poor, uncertain in their play, but Tony Kelly and McInerney scores just before the turn left only seven in it.

McInenery didn’t return for the second half but Clare, the Clare we have grown accustomed to under Fitzgerald, most certainly did.

Within three minutes it was a three-point game. Colin Ryan’s point was followed up by a three-pronged raid. Gleeson made the initial block of Conor McGrath’s effort and Brendan Maher put his body in the way, hurting himself in the process, to deny the rebound but Patrick Donnellan swooped for Clare’s much needed second goal.

Still, this felt like Tipperary’s day from start to finish.

Possession and territory may have balanced out but Bonnar Maher’s strike on 43 minutes kept them in the ascendancy. Just.

Clare eventually shook themselves to life with a string of scores from Colm Galvin, Colin Ryan and Podge Collins. Unbowed, Tipperary were the more creative, direct team on view and despite some heroics from Tuohy there was enough flowing down their way to keep a four point cushion intact.

There was also enough confidence coursing through the Premier ranks for Callanan to blast a 62nd minute penalty over the black spot.

But it was awfully stop-start. Only a glimpse of Championship fervour.

Not that Eamon O’Shea will mind. Tipp looked primed for what comes next.