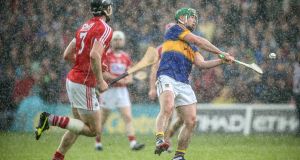 It wasn’t what might have been expected of the first big championship Sunday. In fact Tipperary’s anxiety-free dismissal of Cork in the GAA Munster hurling quarter-final in Thurles was an affront to the nostalgic: a chilly, rain lashed afternoon during which the unseasonally early meeting of the province’s most iconic rivals effectively reached its conclusion in the first quarter of the match.

There had been much anticipation concerning Cork’s challenge. Under new manager Kieran Kingston, the county had methodically plotted for this day throughout the league with no heed paid to the short-term outcomes. Even the team’s cunning ability to use its five-and-zip league record like some sort of martial arts trick to hurl Galway from the relegation play-off into Division One B had been much admired.

On the day though and despite all of this preparation, Tipperary were simply too good.

Their opponents made all the right moves at the start, barging into each other before the start and losing no opportunity to clatter into their opponents but when it came to focusing the intensity on winning ball and using it to create real damage they fizzled out.

Referee Barry Kelly flashed a blizzard of yellow cards and the faux edginess calmed down although Cork replacement John Cronin sailed close to the wind in the 63rd minute with a flick on Séamus Kennedy.

For all the talk of tactical set-up the match came down to very simple precepts: Cork’s defensive strategy failed to quell the opposition’s attack and the use of a bolstered defence with William Egan as sweeper merely functioned to leave the team short-handed up front and dominated and harassed by Tipperary’s backs amongst whom Pádraic and Ronan Maher excelled in plucking down forlornly hit deliveries and in the former’s case returning beautifully measured ball into their own attack. By contrast Egan’s distribution was nervy and at times wild.

Up front Tipperary showcased a smoothly efficient attack in which All Stars and regular threats Séamus Callanan and John O’Dwyer rediscovered without fuss their best championship form despite in both cases a fitful spring.

O’Dwyer’s long-range shooting was excellent whereas Callanan gave early indications of intent in the 10th minute by rising higher than Damian Cahalane, taking the ball and rounding his marker for Tipp’s third point.

Short-listed for Hurler of the Year in the past two seasons, Callanan also provided a moment of bravura technical merit in the 16th minute by rising again, this time to meet Seán Curran’s invitingly dropping ball and to deftly touch it to the waiting John McGrath for another point.

This was in a sequence of scores - begun ominously by Pádraic Maher firing over a loose clearance within 29 seconds - that put Tipperary 0-7 to 0-1 ahead and such was the whirlwind of slick passing and precise finishing that there literally - and not just with the advantage of 70th-minute hindsight - appeared no way back for Cork.

They were overrun at centrefield by Tipperary captain Brendan Maher and Michael Breen and unsurprisingly their five-man attack failed to get traction despite the quality in the forwards. Séamus Harnedy was in excellent form during the underwhelming league campaign but his great ability as a ball winner was largely unexploited as he roamed away from the full forward line trying to find the scraps that weren’t being gobbled up by a rampant opposing defence.

If the second quarter offered some hope for Cork, as the margin came down to four on two occasions but after Conor Lehane - another of his team’s forwards to struggle to find any kind of rhythm - had pointed an immediate response to a 75-metre free by O’Dwyer to bring the score to 0-4 to 0-8, Tipperary simply hit the boost button to trigger another productive spree and out-score their bewildered opponents by 0-6 to 0-1 before half-time.

One of the chances that went astray created its own piece of history when Dan McCormack’s shot was deemed to require the intervention of Hawk-Eye, newly installed in Semple Stadium, but a wide was registered.

Cork’s only response came from a free by Patrick Horgan but he was another forward to draw unhappy contrasts with his best days in Thurles - for instance the qualifier defeat of Clare last summer - and even uncharacteristically missed a free at the start of the second half while making virtually no impact from play and being replaced for the final quarter.

On the resumption Callanan and O’Dwyer struck again to stretch the lead into double digits and although Cork found a response to trim the deficit to seven - which they managed again going into injury-time, as Tipp understandably lost a little urgency - they never threatened to blow the game open by engineering what might have been a vital goal.

Horgan had a hopeful thrash for goal from a 20-metre free but was blocked and shortly afterwards replaced but Tipperary never lost their grip on the match. In the 55th minute John McGrath - one of four championship debutants and after an excellent league - was sufficiently keen to hustle a 65 from a pressurised defender, which O’Dywer converted.

The points flowed in the final 10 minutes without radically altering the scoreboard and the nine-point margin on the whistle in no way flattered the champion s who now progress to a semi-final against Limerick on 19th June.

For Cork it’s back to the drawing board where the county’s hurling fortunes have been regularly pondered over the past two years.

1 Ken Early: Frank Lampard’s problems start at number one
2 Man United in talks with Dortmund over €100m deal for Sancho
3 James Ryan set for up to 12 weeks on the sidelines
4 All in the Game: Klopp gets the last laugh in quiz show
5 Rory McIlroy admits missing the crowds as he looks to end Major drought
Real news has value SUBSCRIBE