Stung Clare eager to bounce back from Cork defeat 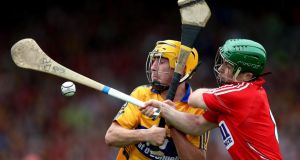 Last summer, Wexford took Clare to extra-time in the qualifiers – Guiney scoring 1-8 – although Clare won out comfortably in the end, by 10 points. With that their season turned in an unstoppable direction towards Liam MacCarthy.

Wexford have never actually beaten Clare in the championship, all four previous meetings, all in the qualifiers or quarter-finals, going Clare’s way. But all the expectation, and with that all the pressure, is on the All-Ireland champions.

Whatever bothered Fitzgerald can’t entirely explain the fact his team struggled to cope with the power and vigour of Cork, or indeed the brute force of players like Patrick Horgan. Hurler of the Year Tony Kelly was well marshalled by Christopher Joyce, and Podge Collins lacked the deft touches and vision that inspired the Clare forwards last summer.

There is the prospect of a certain Shane O’Donnell returning to the mix; he’s now recovered from a hamstring strain which kept him out of the Cork game. Darach Honan, who came off the bench to score 1-0, might also get a longer run, and under-21 star Aaron Cunningham is also back in contention after injury.

Colin Ryan is unlikely to be as poor again, his trademark accuracy letting him down the last day, nor indeed should the midfield pairing of Patrick Donnellan and Colm Galvin be – both of them were replaced before the end the last day.

So to Wexford, who can justifiably feel up to the task here, particularly as they gave Dublin plenty to worry about in their Leinster semi-final, before losing by five points. Young forward Conor McDonald will have gained from the experience, and Wexford’s overall accuracy can only improve too. They shot 12 wides against Dublin.

Indeed manager Liam Dunne has made some notable switches in key positions – bringing in Eoin Moore at right half back, David Redmond at midfield, and Garrett Sinnott at right half forward. All three came on in the Dublin game, but Wexford’s defence will need to be a lot tighter, too.

That all means Guiney is one of the Wexford players to make way, as are Andrew Shore and Diarmuid O’Keeffe. Wexford will need some goals to win this, and Guiney’s dropping to the bench may not help in that regard.

But with Clare presumably reignited by their burning from Cork, with the full terror back in the eyes of Fitzgerald, and with the eyes of the county on them at Cusack Park, it’s easy to see Clare coming through this.