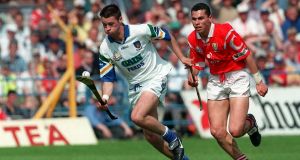 Precedent will have some encouragement for whoever is unsuccessful in Sunday’s Allianz Hurling League final replay in Thurles. In the 1990s when both Clare and Waterford emerged as modern forces in hurling, defeat in a league final was part of the rites of passage for both.

Michael McNamara was appointed trainer and selector when Ger Loughnane took over as Clare manager for the 1994-95 competition (before the introduction of the calendar year).

The new management oversaw an intensive training schedule from the start and, having lost the previous two years’ Munster finals by large margins, their performance levels were notably raised in the league campaign, losing only one match and reaching the final against Kilkenny.

There was a real sense of momentum going into the final, as Kilkenny had beaten All-Ireland champions Offaly in the semi-final. After defeat in that final, Loughnane famously predicted that Clare would win a first Munster title since 1932 because there was no team in the province with as good a defence as Kilkenny’s.

For many supporters that was just whistling in the dark, as the team had now lost three major finals in less than two years. Few would have envisaged that an All-Ireland was less than four months away.

McNamara remembers that the league campaign had been good for morale and hadn’t interfered with his training schedule.

“We had a good result in the semi-final against Waterford. It showed that the team was knitting together well.

“It didn’t make an awful lot of difference to our preparation but it gave us an indication that things were coming together.

“Even the result in the final gave us a good belt in the teeth, which was invaluable in pressing home that we had to move up another gear for the championship. That’s what the conversation was about at training the next day. ‘Now, the real stuff starts’.”

Three years later Waterford were on the cusp of their first championship statement, the Munster victory over the previous year’s All-Ireland finalists Tipperary. Selector Shane Aherne pinpoints the team’s progress to the 1998 league final as being a critical stepping stone even though they lost the match against Cork.

“I remember the semi-final win over Limerick in Thurles. That’s when we were convinced that we’d arrived. Gerald McCarthy had come in the previous year and there hadn’t been an immediate effect but all of a sudden in ’98 we felt we were coming good.”

There are connections with 18 years ago in the current set-up. Manager Derek McGrath played that day.

“Derek McGrath was in the panel and he started that day against Limerick but didn’t play in the final. He was in UCC doing exams at the time and that made it difficult for him to get on the team at that stage.

“I remember Ger Hegarty, who was a big strong fella, coming forward with the ball and Stephen Frampton came to meet him and they collided but Stephen got up first and got the ball. He said afterwards that every bone in his body was aching but he knew that he had to get it.

“I remember Marty Morrissey saying in a report that this was the start of a new, young Waterford team. We played a nice, fast brand of hurling.”

Aherne remembers that the league final announced that the team had arrived and that there was “positivity” even though the title wasn’t won.

“Then the following Sunday we went to Tralee to play Kerry and even though we won, with 55 minutes gone we were behind. Gerald asked me to go over and gee them up on the side and the Waterford crowd weren’t so positive. I remember someone shouting, ‘Aherne, ya baldy b****cks’ – the good will was gone with the prospect of losing to Kerry!”