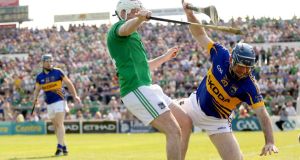 Tipperary’s Eoin Kelly feels the full force of a challenge from Limerick’s Tom Condon during the Munster semi-final at the Gaelic Grounds Photo: James Crombie/Inpho

The novelty, in recent times anyway, of Cork meeting Limerick in a Munster final has so many variables but mainly the fact neither county has won it for a while has us all keen to see how it plays out.

Considering Cork were relegated and Limerick failed to gain promotion from Division One B, it’s genuinely hard to call this match based on form because there isn’t much form to speak of.

It’s been a long time coming for Limerick. So long that I was part of the Tipperary team they overcame when they last won Munster after a replay in 1996. It was my last year as an intercounty hurler.

I remember the Limerick crowd that day. They go through a fair amount of suffering but when they smell blood they become the 16th man. That day they drove the team on in a big way in the second half.

Limerick people are among the best supporters I’ve ever encountered. They arrive like a flood and they’re vocal. It was evident in the semi-final this year, again, at Tipp’s expense. They are in their own city tomorrow so the players just need to give them a reason to turn the place into the Coliseum. Like the Kilkenny people did in Nowlan Park last week.

But Cork, and particularly Jimmy Barry Murphy, don’t play the role of the Christians so well. Particularly to Limerick. They will be mindful of what awaits them.

The Limerick defence, when they were four points down, was superb against Tipperary but those same Tipp forwards have subsequently disappointed again. Still it was simple, ruthless stuff. Like when Tom Condon put Eoin Kelly out over the sideline or Richie McCarthy catching ball after ball with Wayne McNamara and Stephen Walsh’s all round work. But I see goals in Patrick Horgan or Luke O’Farrell. That’s the quickest way to silence the locals.

John Allen is an astute man and says he wants to finish with a strong team but Kevin Downes or Shane Dowling aren’t starting. They will come in but I’d see more value in Dowling, for his free -taking alone, being used from the outset. At least it gives them options. There is certainly method in holding two of the best young forwards in the country in reserve. Maybe it’s the crowd factor again.

Like the sight of Henry Shefflin warming up last week, the sight of that pair and Niall Moran striding down the line will instantly lift the mood. And if one of them comes on and grabs a quick point the whole place will ignite.

It’s been a long time since Limerick have had such a potent bench to fall back on. It worked the last day. Just see how it has served Dublin.

Strange position
Cork find themselves in a strange position. Before the Clare match they were being written off by their own fans but I’ve seen a lot of these young fellas hurl in the Fitzgibbon Cup. The most impressive player was O’Farrell with Mary I but they are backboned by the UCC contingent. Séamus Harnedy is another that impressed me on his debut. It didn’t run for Conor Lehane the last day but he could be the best of the Rebel forwards. They are a dangerous proposition up front.

It’s their defence, without Brian Murphy, that can be exposed. Against Clare, Stephen McDonnell was put under serious strain by big Darach Honan until the balls in dried up. He was just clinging on. Then Clare over complicated their delivery. Limerick won’t make the same mistake.

Hannon will seek to replicate that damage with the half backs pouring more ball in on top of McDonnell. He’ll need a huge game otherwise it might lead to goals. He has decent support alongside him. Conor O’Sullivan, while fantastic against Clare, has been an injury doubt up to now and Shane O’Neill has been sturdy and reliable for several years.

If that last line holds, I think Cork will edge it. They will struggle in the physical stakes and Limerick have more experience but there’s a long-standing tradition of Cork improving when they get the scent of a Munster title.

Jimmy Barry Murphy said it best earlier in the week when noting Kilkenny’s difficulties against Dublin gave every team a lift. It made everyone a contender again. Cork have gone from arriving with trepidation to face Clare to be facing down a long open road if they beat Limerick. Cork are Cork. That still matters. But they’ll need goals to silence the Limerick crowd.

In Thurles tonight, I think Kilkenny are vulnerable. It will be unbelievably difficult to lift it again just seven days on from the high-stakes meeting with Tipp. Shefflin and Paul Murphy compared last Saturday night in Nowlan Park to an All-Ireland final calling it an occasion they’ll never forget. It was that but it was also just a phase II qualifier. Exact same as Waterford beating Offaly in Tullamore and that was a very long way from an All-Ireland.

Murphy’s return shored up the Kilkenny defence while Jackie Tyrrell was like his old self. But the Tipp forwards were toothless. Kilkenny are still not threatening to score goals. That’s one goal in four games now. Walter Walsh is probably moved to full forward to address that very problem.

They should survive simply because Waterford have lost more players than anyone else in the last year. It’s very hard to improve when John Mullane, Shane Walsh and Stephen Molumphy are not around to drive them on. They have pace in the likes of Maurice Shanahan and Jake Dillon. Enough to trouble Kilkenny but not to end their Indian summer.

I hesitantly think Clare will progress even though Wexford, buoyed by the under-21 success, will not go quietly. But I’m not convinced about Clare.

Former Cavan captain confident his county can compete against Dublin 21:31
Bale and Dele Alli score as Tottenham qualify with draw in Austria 21:19
Connacht use visit of Benetton to give as many players as possible match time 20:51
Celtic surrender two goal lead in AC Milan defeat 20:16
Fans told not to excessively sing or hug as Premier League crowds return 20:02
Crossword Get access to over 6,000 interactive crosswords