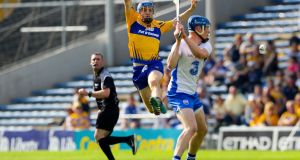 My impression over the course of the National League final and the replay that followed was that Waterford were the better team over the two matches even though they didn’t win it.

I argued pre-match that it came down as much to a refereeing decision as anything from Clare. That assertion was given substance by the events in Thurles. Waterford were full value for the seven point victory. Clare can have no complaints.

I think I was expecting a bit more from the game as a contest. In my mind’s eye I saw a humdinger that would go right to the wire, partly influenced perhaps by the ideal weather conditions for hurling. It didn’t pan out like that but Waterford won’t care; it was a huge win.

Waterford set-up bore a familiar look and they set about ensuring that the middle third of the pitch became the battleground. Really the story of the game was that Waterford outfought Clare in that middle third. They won all the rucks in that area of the pitch and those tussles were defining in terms of momentum and self-belief.

It has a deflating effect on the opposition. If a team is losing most of those 50/50 scraps it not only saps the confidence but there’s constant pressure on your backs and no way forward through the congestion.

Waterford emerged from those rucks in possession, more often then not – they didn’t always do the right thing – and ended up comprehensively winning that cluttered battleground. Waterford manager Derek McGrath will be delighted with that aspect of the display and also the work-rate; it was phenomenal.

That work-rate makes them such a daunting prospect going forward in the championship. They boast an incredible defence and have some brilliant individual players who, taking the lead from the ‘Brick’ Walsh and Kevin Moran, work selflessly and tirelessly for the team.

That hasn’t always been the case with some Waterford players in the past, brilliant individuals, but where once that team culture and dynamic was missing, it is so evident in the current side.

Waterford’s game is built on sound defence. Tadhg de Burca is acting as a sweeper and fulfilling that role very effectively. Philip Mahony continued his man marking assignment on Tony Kelly from the league final clashes and this time did so to great effect. Kelly was anonymous.

Pauric Mahony was outstanding on his return from frees and play and then you have the unbelievable class of Austin Gleeson. Maurice Shanahan’s return to the Waterford team gives them a brilliant outlet up front. Shane Bennett and Patrick Curran weren’t at their best today.

His goal in the first few minutes was really critical, it gave his team a bit of comfort, helped them to settle into a rhythm. Even though as usual they missed a good few chances and took wrong options; Shane Bennett took a point when Curran was completely unmarked. That should have been another goal.

Clare had ample possession in the first half but were conspicuously wasteful, their best players hitting too many wides. The goal chance that fell to David Reidy early on was about the only one they created through the entire match.

Aside from that perhaps the next most exciting moment in goal terms was watching their fullback Cian Dillon who thundered two thirds of the length of the pitch after receiving a short puck-out. It was like watching something from an Under-12s match.

It proved to one of the only times they could safely negotiate a passage through the middle third of the pitch and it ultimately came to nothing. Critically for Clare, Kelly and Conor McGrath completely lost their way, racking up some dreadful wides from frees and 65s. To borrow from golfing parlance they mostly missed on the amateur side, the near post in a crosswind. That’s really not acceptable at this level.

Waterford would have been delighted with their four-point halftime cushion because it was down to Clare’s inaccuracy as much as anything else. Clare needed a bright start to the second half but couldn’t manage it.

Conor McGrath missed a free on the near side, then they won a 65 and Kelly missed it again on the near side. Waterford in contrast tagged on some excellent scores. Pauric Mahony’s precision from frees could not have offered a greater contrast to Clare’s woes.

To their credit Clare did reduce the deficit from seven points to four but at that stage Podge Collins had left the fray, Conor McGrath, their talisman, was also gone. When you consider that Kelly, John Conlon and Colm Galvin were also struggling or replaced it was hard to see how they would sustain the charge.

Austin Gleeson demonstrated the exuberance of youth, supplemented by ability, in firing over that line ball. Maybe it is my age but I thought it was very high risk and the wrong option. However once he nailed that it was like reigniting the gas on the Waterford challenge. Moran knocked over a couple of great points and then Gleeson bookended this glut of points with a mammoth score.  That took them away again.

You could see that Waterford really wanted this match, possibly fuelled by hunger and an element of anger that resided after the league final defeat. Clare looked like a team that were coming off the back of winning something. They were lethargic, outfought in the middle third and that was fatal to their chances.

When you set up the way Clare and Waterford do you have to have an unbelievable work-rate and win the rucks. Waterford were the clear winners on the day.

TV View: Baby talk in the studio, rusty performances on the pitch 17:55
Ulster start fast to put the Dragons to the sword in Belfast 17:38
Here is your handy guide to sport on television this week 17:01
Southampton stop Everton in their tracks at St Mary’s 17:11
Inspirational Burke points the way as Dublin clear opening hurdle 16:35
Crossword Get access to over 6,000 interactive crosswords