My favourite sporting moment: Nicky English pulls a rabbit from the hat

Tipp man’s goal against Cork was such a freak event, it has never come close to being replicated 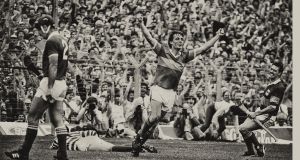 It’s worth stating at the outset that my favourite sports moment of all time is not when Tipperary’s Nicky English kicked that soccer-style goal past Ger Cunningham of Cork in the Munster final. Not exactly. Not quite. But we’ll come back to that.

First, some context. In the summer of 1987 I was nine years old. It was the first year that my parents had deemed me old enough to bring to matches. And the match-going experience was decidedly different to what it is these days.

For one thing, the roads were all shite, as the EU had yet to wave their magic motorway wand. Travelling to pretty much anywhere was likely at some point to take you down a boreen with grass up the middle of it. But apparently the GAA hadn’t noticed this particular problem. Believe it or not, Tipperary played five matches in the Munster hurling championship that year, and four of them were in the hurling mecca that is Killarney.

And yes, before you ask, we brought sandwiches and flasks of tea to every game. Given how long it took to get from south Tipp to Killarney in those days we should have brought sleeping bags as well.

The night before a game my parents would pore over a map, picking a route and, depending on the opposition, identifying the arteries that were ripe for congestion. “The Clare crowd will surely come through Ballydesmond, so if we go through Millstreet we’ll avoid them until Barraduff.” Ah, the glamour.

My Dad drove, while my Mam took navigation duties, the toughest task being the effort of folding the gargantuan map in a manner that allowed her to read it without obscuring the entire windshield.

Two family friends came to most of the games with us. Tommy Sweeney wore a baseball cap and puffed on a pipe, while delivering droll witticisms from the free side of his mouth. Patrick “Butt” O’Dwyer had a loud laugh and an easy manner. Long retired from the pitch, he had once been renowned for his on-field temper but by that stage the only thing that seemed to raise his ire was bad referees. My sister Michelle and I would sit wedged in between these two bears of men. There were no seat belts but I’d wager we could have survived the car flipping over with those two on either side of us.

I suspect that everyone in the car other than me was travelling more in hope than expectation. Sixteen years of losing will do that to you. What’s the opposite of a magician pulling a rabbit from a hat? That was Tipperary – finding new and painful ways to lose every year.

But I knew none of this, of course. I was scar free. And it turned out to be a gala year to introduce a nine-year-old to Munster hurling. Nearly every game went to a replay. John Fenton scored a goal that was so good it inspired an ad campaign and single-handedly stopped mastitis that summer. And the whole thing ended with Richard Stakelum lifting the cup and declaring to Tipperary fans that “The famine is over.”

And, of course, it was the year Nicky scored that goal.

English was my idol. Over many hours of battering a ball off the gable end of the house I would attempt to imitate the scores that he got. It was hard to do. You could put together an identikit of a DJ Carey goal pretty easily: quick pick, acceleration, short grip, goal. Same for John Fitzgibbon: lurk, lurk, bang, goal. English had an ability to extemporise that set him apart though. Half-volleys, tennis-style hits, hockey-style flicks. Even the final replay that year saw him score a no-look no-catch classic. His improvised masterpiece though was the day of the drawn final in Thurles.

By the morning of the game, Tipp fans were beginning to climb aboard Babs Keating’s hype train. They were also excited to finally get to see a match they didn’t have to drive to Killarney for.

The official attendance given for the game is 56,005, which is nonsense. I doubt I was the only one lifted over a turnstile that day. The steady stream of people climbing over the back wall of the Killinan End presumably didn’t have tickets either. The atmosphere was sheer pandemonium.

While I remember only snippets of the game, the goal is emblazoned into my memory. I think I know why.

Many of hurling’s greatest moments happen too quickly to be seen. Super slo-mo cameras have been a great boon to the game. You might have been there this year when Cian Lynch did his between-the-legs pick-up, but you only saw it afterwards when it was played on a loop on social media. Same goes for David Burke’s bullet-time point v Kilkenny in 2012, or JBM’s overhead v Galway in 1983. If you saw it you weren’t there.

English’s goal breaks that rule. A moment of genius that we not only all saw, but we all saw coming. It’s midway through the second half and Tipp are playing well, leading by four. A goal could blow the game wide open. Joe Hayes gathers a ball in midfield and booms it in. English realises that the ball will clear both himself and Cork full back Richard Browne. As he turns to hare towards goal, Browne loses his footing and as he goes down knocks English’s hurley out of his hands. English doesn’t pause but continues his chase of the ball. As he reaches it, he is somehow calm enough to take a touch on the ball. To stop it running away from himself he nudges it onto his right foot.

And there’s my favourite moment. In that split second the audience catches up to the action. Suddenly everyone has figured out the mathematics. He doesn’t have a hurley. Is he about to try to score a soccer goal? We have never seen this before.

Only two things can now happen. Either he scores and we’ve seen a goal for the ages, or he becomes a laughing stock for even attempting it. And there we are in the crowd. Watching. Rapt. Waiting. Schrödinger’s audience. Then English opens his body and side-foots the ball into the corner of the net. The stadium shakes. Delirium tremors.

Try it in your back garden with a sliotar sometime. It’s next to impossible, as thousands of youngsters around Tipperary in the following weeks could attest. There’s a reason that no one has scored a goal like it since.

I’m sure part of my love for the goal is due to my age at the time. Sport then is like the music you listen to when you’re a teenager. It imprints on you. Even now I can remember celebrating that goal with my parents in the stand. It was the moment I signed up to the journey of being a Tipp fan, and of games mattering far more than they should.

But it also serves as a good reminder. Sometimes all those journeys down shite roads are worth it. And sometimes the magician really does pull a rabbit from the hat.

Due to the volume of entries we are extending our readers’ Sporting Moment competition. To be in with a chance to win a selection of sports vouchers, email your favourite sporting memory to sportingmoment@irishtimes.com. Entries should be no more than 400 words and should be submitted by Wednesday, April 22nd. A selection of the winning submissions will now be published on Saturday, April 25th.