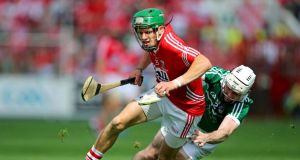 For all the entertainment value in the Munster final I’d have to damp down my pre-match belief that Cork and Limerick were potentially the two best teams left in the championship.

For Cork it’s a significant step to win a trophy because Jimmy Barry-Murphy has effectively built a new team, and for them to achieve a Munster title is recognition of those efforts. I felt both teams were a bit distracted by the occasion but it ended well for Cork.

The main difference between the teams was goalscoring ability. Cork were ruthless whereas Limerick had four opportunities – three for Shane Dowling and one for David Breen – but none of them raised a green flag, although one was down to super defending by Shane O’Neill.

Limerick didn’t make it easy for themselves. Three points down with half-time approaching, having played with the breeze, they ended up having to put in a big effort to level it before going in when they should have been well clear.

It had been wasteful by Limerick, and I was fairly sure Cork would kick on, but in the second half they became affected by the same shortcomings and hit the same number of wides. This had the effect of keeping Limerick in the game and it was only when the goals went in that the match changed decisively.

Séamus Harnedy really found his range in the second half in a courageous performance because things hadn’t been going well for him in the first half, and even in the second he was susceptible to some bad wides. But the effort and bravery he put in for the goal turned the match.

I had expected Cork to be that bit slicker in the forwards, and that’s how it played. Graeme Mulcahy was very good and created trouble all day but Limerick had to take off Declan Hannon and Kevin Downes, and ultimately they didn’t have the panel strength to replace them effectively.

Cork on the other hand were able to bring on Paudie O’Sullivan and William Kirby, who both improved things from the bench.

They also didn’t do as well in the middle as they had against Tipperary when James Ryan and Paul Browne were key performers. Yesterday Aidan Walsh was for me the stand-out midfielder, and Daniel Kearney – although he wasn’t as consistent – read the play well and used the ball effectively by the end.

Cork will be happy to go away for a few weeks and iron out their problems but I think Limerick’s are more fundamental, and they’ve dropped in my pecking order. It’s starting to look like this year’s All-Ireland will be decided amongst the big three but there’s a while to go yet.

That’s been on show in the championship. They weren’t at the races against Cork, and although Clare did well to survive with 13 men for most of the second half on Saturday, they have struggled to make the adjustment to life as All-Ireland champions.

It’s important though not to disregard what Wexford did. I think it’s huge for hurling to have them back because they command such massive support when going well. As a team there’s every chance they can blossom if they can survive the celebrations and defeat Waterford next week.

After all, this gets them no farther than Offaly got by beating Antrim.

It’s hard to know what the limit will be for them. They’re a traditional Wexford team with good hurling skills. Looking back at their match on Saturday night I was struck by the promise throughout the side, from Matthew O’Hanlon at full back through Lee Chin in midfield and the young forwards like Liam Óg McGovern, Conor McDonald and Jack Guiney, all of whom can hurl.

I’m not sure Wexford shouldn’t be taken seriously.

Tipperary-Offaly was over as soon as it started and that was as expected. Tipp were much like they were against Galway. When they used the ball well they looked impressive but at other times they reverted to hit-and-hope.

Offaly fought hard and showed more spirit in the second half than at any stage against Kilkenny and got the margin back to four points. Their basic problem is they’re just not fit enough, and Wexford have shown you need a standard of conditioning and endurance if you’re going to compete at the top level.