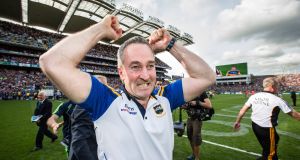 Tipperary manager Michael Ryan: “I wouldn’t have minded what my role was, once you were involved with this group.” Photograph: Cathal Noonan/Inpho

“I said it last night: you almost dare to dream, we’ve done that so many times, we’ve failed so many times,” said the Tipperary manager.

“And it’s not just us, it’s everyone. It’s great. The last time somebody got a bit of hope like this – and I suppose we talk about it like that in terms of hope just because Kilkenny are so good – but it was 2013 [Clare] and before that it was us in 2010. Not enough other teams have come through.”

This is season number seven for him in the Tipp backroom. Two All-Ireland wins but some harrowing defeats – to Kilkenny and others.

“I haven’t been the boss but you’re just so closely involved and it was slightly incremental every year, just in terms of moving further up the food chain. Look, it worked out. I wouldn’t have minded what my role was, once you were involved with this group,” Ryan said.

A wonderful aspect of this Tipperary victory is that it makes Kilkenny seem mortal, if only for the months ahead, as Sunday’s final shows them to be fallible where everyone presumed they were invincible.

“Without a doubt and that’s the fantastic thing about it. I can imagine several other counties waking up this morning and saying, ‘Yeah, okay, let’s plan and do this and that’,” he said.

“Maybe they won’t see Kilkenny as ‘We can do all the things we’d like to do but they’re going to beat us at the end’. It may not be like that and it may just go back to old norm of Kilkenny beating us all anyway. But look for today, we all have hope.”