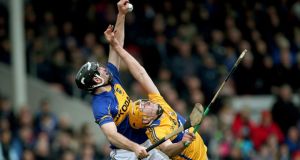 For all of Davy Fitzgerald’s stated concerns at the start of the season about his team’s ability to raise it for all of their league fixtures, motivation for yesterday’s trip to Tipp was never likely to be an issue.

Traditional rivalries combined with a stiff beating in the pre-season Waterford Crystal final to give Clare plenty of motivation.

The All-Ireland champions came to Thurles and before a crowd of 8,133 gave the wasteful hosts an object lesson in putting scores on the board and became the only away winners in Division One A this season. In so doing they were able to rest from the start Hurler of the Year Tony Kelly and last September’s hat-trick hero Shane O’Donnell.

Both eventually made an appearance but in their absence Conor McGrath supplied the three goals and his 3-1 from four scoring attempts typified the winners’ economy.

In contrast Tipperary thrashed around and came up with 15 wides in a display that was all about chasing their opponents, who were always able to tip the pedal whenever their lead was seriously threatened.

They also made errors at the back, losing possession easily and their puck-outs were erratic. Eamon O’Shea’s side also found it hard to engineer the sort of goal opportunities that Clare appeared to carve out effortlessly, as Patrick Donnellan lay back and made life difficult for Tipperary’s attack.

Aside from the winners’ four goals, Darren Gleeson had to make good saves in quick succession in the final quarter to deny Peter Duggan and O’Donnell. Tactically Tipp were exposed by Clare leaving one man – generally McGrath – in the lone wolf role in the full forward line.

Long ball
Paddy Stapleton did his best to cope – swooping effectively for an intervention to deny Darach Honan – but he was vulnerable to being given the slip, as happened in the 11th minute, when McGrath crashed in the first goal after a fine, long ball from Patrick O’Connor. The defender was also left exposed when John Conlon and a supporting cast bore down on him after the ball had been turned over harmlessly for Clare’s third goal.

By contrast Tipperary had wides from four different free -takers before half-time: John O’Dwyer (a late replacement for Séamus Callanan who had a quad strain) and who otherwise was the brightest spark in the home attack, Brendan Maher, Noel McGrath and even goalkeeper Gleeson.

O’Shea made other changes, replacing Conor O’Mahony (rested from the start after his recent comeback) and Pádraic Maher (head injury) with Tomas Hamill and Thomas Stapleton.

Shane McGrath roved from wing back to centrefield and pushed forward for a point, playing busily but for the team as a whole there was a frantic air to the effort, chasing down the constant deficits, which stretched every time they got within touching distance.

McGrath’s second goal pushed the match back into Clare’s control – a fine ball into Podge Collins (on as a replacement for the luckless Honan, who had picked up a bad hamstring injury) from Colin Ryan was taken on by Collins and with the cover rushing towards him, he picked out McGrath in splendid isolation.

Within minutes there were suddenly eight points in it after the goal from Conlon, who had a storming first half including a cracking point. It sprang from the sharpness of the Clare backs. Cian Dillon burst onto the ball to disrupt a Tipperary attack, played it to Brendan Bugler who moved it on to Galvin, who played the scoring pass.

Tipperary’s best spell was in the third quarter. They returned after the break and tightened up at the back by using Brendan Maher in a more withdrawn role and outscored Clare 0-6 to 0-1. O’Dwyer, from a 65 and a couple of frees and play, Shane Bourke and Jason Forde, all combined to get the margin back to a score.

Air hissing
Inevitably, Clare scored a goal in reply. Equally inevitably it was McGrath darting in to make it 4-9 to 0-14 and you could hear the air hissing out of the Tipp revival.

The teams shared 12 points equally in the final quarter, leaving the home side with a formidable total concession of 9-35 over the past two matches.

After a controversial week, Clare manager Fitzgerald was happy to get back to basics.

“It was a good day – the work rate of the boys was incredible. I was proud of their work-rate and the amount of tackles they got in. We missed a few goal chances but Tipp missed a lot too. Any time you come down here and get a victory is great.

“I knew we would have dips. We got up very high for the Kilkenny game and dropped back for the Dublin game. There was no comparison between how we played today and that day . . . . There was a big push to get a performance today especially after they beat us in the Waterford Crystal.”

“I’m disappointed. The first half was poor enough; we found it hard to get on top of what their structure was. The goals went in and that’s ultimately what cost us . . . but we had a good chat at half time and I think we improved in the second half until they got the fourth goal.

“Last year we won games but it didn’t tell us where we were in terms of personnel, this year this tells us exactly where we are and how much work we have to do, the positives we can take from it.”