Logic and form point to Wexford Leinster U-21 final victory

Kilkenny stacked with Leinster minor champions from 2013 and 2014 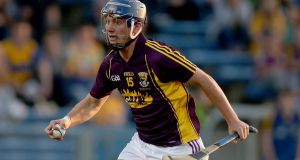 Wexford’s Kevin Foley: his senior distractions have now been removed

Wexford need this. There’s clear evidence they have superior hurlers to Kilkenny who have been in a slump at this age grade since 2012.

Wexford are also closing in on a three-in-a-row, not achieved since 1966, while senior distractions for the likes of Liam Ryan, Conor McDonald and Kevin Foley were helpfully removed by Cork last weekend.

So this is their time, right? It certainly isn’t Dublin’s year after being cruelly dumped out by a late Mark Mansfield goal in the quarter-final. The lesson was salient: Kilkenny will always possess enough natural hurlers to prevail.

Nor have they been remotely hindered by senior commitments. Conor Martin, Brian Troy, Diarmuid Cody (son of Brian), Chris Bolger and James Maher have been training in Nowlan Park this summer but none of them made the 26-man panel for last Sunday’s victory over Galway. Maher and Troy are benched here.

More cautionary notes: Kilkenny are stacked with a raft of Leinster minor champions from 2013 and 2014. This includes scoring forwards in Liam Blanchfield, Willie Brennan and Liam Hickey, while Conor Martin has the dead eye from frees.

A well-bred inner belief staved off any thoughts of losing to Dublin on that June night in Parnell Park.

“There was probably never more than five points in the game,” said Martin. “Every time they scored we seemed to go down and get a score, it was always up and down the field.

“Mark Mansfield just broke on to a ball at the end of the game. He probably was going for a point and it spun off his hurl and the Dublin goalkeeper had the misfortune at the end of the day and dropped it into the goal.”

In the semi-finals Kilkenny edged past Carlow, while Wexford dispensed of Offaly.

“Wexford are going for the three but we were unlucky two years ago not to beat them in the Leinster final when we suffered a bit of misfortune ourselves,” said Martin. “Last year they beat us in the first round again, but I think if we work harder than them we will win on the day.

“I think this team needs a Leinster title to go on to bigger things. We were beaten in the first round last year and at minor we were beaten by Dublin in the Leinster semi-final, so I think if we got some silverware under our belt we could grow in confidence again and drive it on more. Some people are starting to call it a famine, but three or four years I don’t think is a famine.”

Still hard to see past the scoring ability of McDonald and Foley despite Cork holding the pair to a grand total of 0-2 last Saturday night. Logic and form point to Wexford but confidence favours Kilkenny. That always matters but Wexford’s ire to shade it.

1 Six Nations: Ireland are contenders but England still the team to beat
2 In Donegal Michael Murphy is seen, simply, as a godsend
3 Owen Doyle: Creeping professionalism of schools rugby a threat to the game
4 Gary Neville in Qatar an exercise in semi-journalism
5 Mike Catt hopes to have Irish backs purring in Six Nations
Real news has value SUBSCRIBE