Former Cork boss to return for a second time 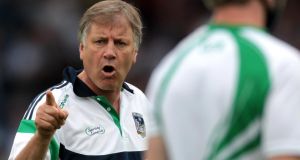 The Limerick County Board are still tight-lipped about their new hurling management team for 2014 although it now appears that former county captain TJ Ryan will join up with former manager Donal O’Grady.

Speculation that Cork selector and former All-Ireland winning goalkeeper Ger Cunningham was about to take charge is wide of the mark. Cunningham has opted out of the Cork set-up for 2014 due to work commitments. He met with Limerick officials to discuss the possibility of replacing John Allen in Limerick but that won’t be the case.

Limerick officials say an announcement may be made “within the next day or so”, with Ryan and O’Grady now emerging as their preferred candidates.

“We’re still waiting for confirmation, which should be in the next day or so,” said Limerick county secretary Mike O’Riordan.

Cunningham had been assistant coach and selector to Cork manager Jimmy Barry-Murphy for the past two seasons, which culminated in the county coming within seconds of winning this year’s All-Ireland before losing the replayed final to Clare. Last week the Cork County Board confirmed the ratification of Barry-Murphy’s entire backroom team for 2014, including Cunningham, and also Johnny Crowley, Kieran Kingston, and Seánie McGrath.

Had Cunningham taken charge of Limerick he would be the third member of Cork club St Finbarr’s to hold the position following predecessors Allen and O’Grady.

1 ‘For 25 minutes I ran out of oxygen’: Pepe Reina on his coronavirus battle
2 Rory McIlroy admits Portrush nightmare was catalyst for his return to the top
3 Sky Sports customers set to save on bills until Premier League returns
4 Gerry Thornley: Changes to tackle laws could transform rugby by time of next World Cup
5 ‘This is sick’ - seventh-tier Swedish club cancels friendly after betting mayhem
Real news has value SUBSCRIBE

Rory McIlroy admits Portrush nightmare was catalyst for his return to the top 21:00
FAI moves to defer portion of salaries as Fifa ponders cash support 20:30
NFL votes to expand postseason following cancelled annual meeting 20:21
‘For 25 minutes I ran out of oxygen’: Pepe Reina on his coronavirus battle 20:06
World Rugby aiming to outline range of options by end of April 19:03
Crossword Get access to over 6,000 interactive crosswords