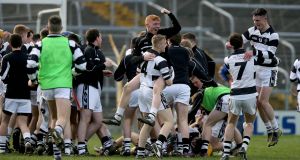 How school performed in last year’s championship: First round exit

How school performed in last year’s championship: Beaten by St Kieran’s College who eventually went on to win the All-Ireland.

Prospects/county players: Darren Byrne, Conor Firman and Ciaran Murphy are among 15 players with county experience on the squad.

Prospects/county players: Tommy Walsh is in his third year with the Kilkenny minors, Colum Prendeville is an Irish International Basketball player and Sean Carey is an All-Ireland winning handballer and the son of DJ Carey.

Name of school: Borris VS

How school performed in last year’s championship: Lost the semi-final to St Peter’s

Prospects/county players: Centre forward Kevin McDonald is the key man as he was for last year’s Carlow minors.

How school performed in last year’s championship: Beaten in the preliminary round by St Peter’s

How school performed in last year’s championship: They won the Leinster Senior B Championship and were All-Ireland Senior B Finalists

How school performed in last year’s championship: First round defeat to St Peter’s

How school performed in last year’s championship: Beaten by Dublin South in extra time of preliminary round

Prospects/county players: Donal Burke has been a Dublin minor for the past two seasons but has been struggling with injury, while Colin Currie is an Irish international cricket player.