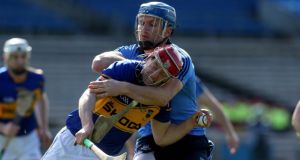 Tipperary 1-19 Dublin 0-19: Tipperary edged past Dublin in Thurles this afternoon to claim the last of the Allianz Hurling League quarter-final spots and escape from the relegation final, which will now be between Dublin and Waterford.

In a thrilling contest that surged down the finishing strait with Tipp needing a three-point win, the outcome tilted one way and then another, as Alan McCrabbe and Callanan swapped points in the dying minutes before replacement Ronan Maher sent the home team into the decisive 1-19 to 0-19 lead.

The score that changed the match for Tipperary came when they were trailing by four, 0-9 to 0-13 and looking in danger of losing touch. Callanan, their top forward on the day, cut through and although his shot was saved by Gary Maguire, who also blocked Patrick Maher’s follow-up, the third bite of the cherry saw the ball trickle into the net in the 42nd minute.

Raising their game, Tipp rattled off three points in a row from Noel McGrath, two, and a free from Callanan to take the lead. There was a further three-point volley – again scores from McGrath and Callanan and one by John O’Dwyer – between the 51st and 53rd minutes to push the winners three ahead for the first time.

It was a disappointment for the Leinster champions who had dominated the early stages of the match and who conceded too many scores to careless turnovers in possession.

For the first 20 minutes though Dublin were thoroughly on top. Playing a two-man full-forward line, with Colm Cronin playing around centrefield, they found space and exerted pressure on a scattered looking Tipperary. Alan McCrabbe started at centre forward but played in a linking role and seemed to find room at will to take ball and use it effectively.

His dead-ball striking was also impressive and he accounted for Dublin’s first four scores, two each from play and frees. Tipp kept the extra man in the full back line but were still run around by David O’Callaghan and Danny Sutcliffe.

The home side’s attacks were sporadic and disjointed, mostly launched by hopeful hits up the field, but they none the less created some chances. Gary Maguire had to be smartly off his line twice to block runs by Patrick Maher. But by the 21st minute, Dublin led by six, 0-9 to 0-3.

Tipperary responded to out-score the visitors by six points to one in the 15 minutes or so before the break – Callanan, twice, Kieran Bergin and O’Dwyer in an uninterrupted sequence to set up the second-half drama.