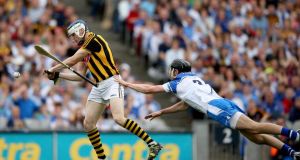 That sense of the predictable that Kilkenny have brought to so many big matches over the past 17 seasons was again in evidence in the first of the GAA hurling All-Ireland semi-finals in Croke Park.

They sized up the opposition, gradually imposed their own priorities on the contest and kept playing to those strengths for 70 minutes.

Once again the whole enterprise was underwritten by the combination of Richie Hogan and TJ Reid, who scored 1-14 between them and supplied all of the team’s scores in the first half. The goal came in the 17th minute and meant Waterford were chasing the match from an early stage.

In a demoralising mix-up between their otherwise excellent sweeper Tadhg de Búrca and full-back Barry Coughlan, the ball ran for Reid. In those circumstances umpires can generally reach for the green flag immediately.

But after half-time other Kilkenny forwards came into the reckoning.

Ger Aylward, who opened the season with a hat-trick of goals against Wexford, struck four second-half points and nearly got a goal.

The veteran Eoin Larkin craftily slipped one of Waterford’s most prominent Young Turks Austin Gleeson to snip a point and Cillian Buckley, imperious in defence albeit unmarked for long spells, boomed over one from distance.

It was a typically unfussy display by Kilkenny, nearly all of their players fulfilling the allotted roles and maintaining the pressure on inexperienced opponents until they could cope no more. Young guns Waterford came with a young team for whom this has already been a great year – to the extent that the county bristles at the notion that they were in ‘bonus territory’ – and a road-tested system that has allowed them to win a National League, reach a Munster final and be at the top table of this year’s championship where there are only three dining companions.

The limitations in their game that led many to conclude they would be unlikely to beat the champions did, however, come against them and, although they gave a lively and competitive account of themselves, this match passed by with Waterford needing to do something to shift the contest off its axis.

They got close and led in the early stages by a point or two, but at no point did the impression emerge that Kilkenny would be severely tested. 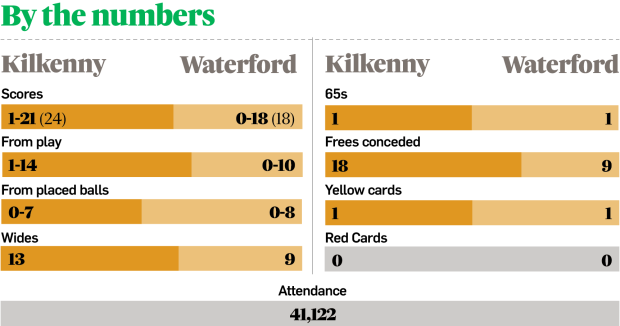 There was some misfortune for Waterford – they gifted their opponents the match’s only goal – and indicators that the issue of experience on big days in Croke Park is pertinent for young teams on their first visit.

The overall problem was in covering the field. If a team overpopulates its defence to cope with opponents, it takes great energy and precision to make attacks count at the other end.

Waterford pursued the game plan enthusiastically but the errors at the back undermined their good defensive intentions and Kilkenny had the personnel to punish that, whereas the champions did not have to alter their approach to deal with their opponents’ innovations.

Kilkenny have always placed a premium on forwards working hard. As the second half wore on and the match moved further and further from Waterford’s grasp, it was noticeable that their practised defensive structure was increasingly harassed by Kilkenny forwards snapping at them in possession and forcing both errors and rushed clearances. A concern It could be a concern for the champions that they have failed to score more than one goal in their last two matches, after emptying a bin-load on top of Wexford in the first match. But yesterday they created a number of chances even if only one was taken.

In the opening 10 minutes alone there were three near misses: Shane Fives stopped an early one on the line; Richie Hogan overhit a pass to Eoin Larkin that left the receiver vulnerable to being pressurised into a wide and Walter Walsh running in on goal was hauled to the ground by Waterford goalkeeper Stephen O’Keeffe – and didn’t even get a free.

He didn’t miss one all day – although at the end there were a couple dropped in as the team was forced to gamble in search of solvency – and some were from daunting angles and prodigious distances, including one from inside his own 65.

As usual he also had to play a lonely role up front, sometimes with a companion but at times on his own. In the 29th minute he somehow managed to quarry the ball out of a cluster of defenders and scored a point.

Kilkenny limited the damage though – tellingly just before Reid’s goal, Shanahan had gone for a similar ball but his twin opponents made no errors and the ball was cleared.

Joey Holden coped well with Shanahan overall and Paul Murphy availed of the frequent opportunities to clear ball as a free defender.

There was still plenty of life in Waterford. They came back at the end of the first half with a burst of energy. Gleeson attacked quite a bit. He ended the match in the full forwards (such as they were) – and scored one lovely point, ending a defensive siege with a surging run before striking off his hurl from around 60 metres. In for the kill The second half was less encouraging for the challengers. Aylward began to threaten and his point scoring intensified the pressure, as Kilkenny’s strike capacity expanded.

Early points from Reid and Aylward made it a four-point lead and for 28 minutes of the second-half the margin was greater than a goal, and that never looked like coming for Waterford.

Colin Dunford made a great impact and used his pace and some good marksmanship to score from play in 11 minutes, but it was simply keeping up rather than making serious inroads.

By the end the margin was hovering around the two-goal mark. Waterford were obliged to hit and hope – although with the Kilkenny full-back line standing sentry it was more hit and forget about it. The champions had done their work well.

In the final they will face either Tipperary or Galway, both of whom are familiar September opponents from recent years.

Simon Zebo set to return to Munster next season 13:00
Seedorf wants to ban players from covering their mouth while talking 11:44
Liverpool leaning on Salah more than ever right now 11:20
Four Leinster players nominated for European Player of the Year award 10:37
Chelsea have a free hit from here but may not get a better shot at it 08:49
Crossword Get access to over 6,000 interactive crosswords