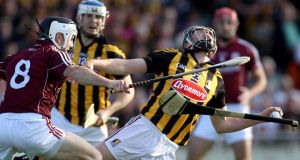 An intriguing but predictable encounter in Tullamore ended with yet another affirmation of Kilkenny’s almost feral instinct to survive and another demonstration of Galway’s inability to hold nerve and focus in successive matches.

The intrigue was more to do with the build-up to Saturday’s GAA Leinster hurling semi-final replay in O’Connor Park. Expectation driven by the previous week’s dramatics plus the decision not to televise the replay combined to draw a full house.

The teams were as unwilling to show their hands as a bluffer in Las Vegas and if the Galway team announcement, as the players gathered in pre-match huddle, was reminiscent of the Ger Loughnane psycho-drama in Ennis six years ago, the late release of the team sheet was a more unusual stratagem from Brian Cody.

Pre-match speculation that former Hurler of the Year Michael Fennelly might be recalled a week after suffering a back spasm proved overly optimistic but Kilkenny still managed five changes on the drawn match. Galway made just three switches.

So how did the contest swing in six days from a draw to a comfortable win for Kilkenny?

You could start by pointing out that it didn’t actually swing that much. The main difference was that there were no late miracles from Galway. Yet the margin was almost the same in both matches as play entered injury-time – Kilkenny four ahead as opposed to three in the drawn encounter.

Kilkenny’s changes all worked. They were tighter at the back with Brian Hogan’s return to centre back and Jackie Tyrrell’s reversion to the corner benefiting both positions and Joey Holden provided added mobility at wing back.

Centrefield was noticeably more competitive with the surprise choice of Conor Fogarty – hitherto a defender – giving greater combativeness and industry in partnership with Richie Hogan, whose less extrovert performance was an indication of the greater attention to defensive detail.

The attack hummed along nicely. Even in the early stages when an explosive opening – goals from TJ Reid and Jason Flynn cancelling each other out within a minute appeared to set the crowd up for a classic – gave way to a brief and singular Galway superiority on the score board, Kilkenny’s redesigned attack was causing trouble.

Galway responded to the problems by fouling, a solution based largely on need rather than carelessness, and TJ Reid exacted the full price – pointing nine frees from nine chances.

Reid’s displays have been pivotal so far for Kilkenny in the relentlessness of his dead-ball accuracy and the menace in general play that has yielded three goals in the two Galway games.

Galway’s plans fell asunder from an early stage. Once Pádraig Walsh, exceptional in yet another position, centre forward, put Kilkenny in front in the 15th minute, Galway were never again on equal terms.

Their plus points from day one were negated. Iarla Tannian was subsumed by the task of keeping track of Pádraig Walsh. In general the ball from defence was random and uninviting. Up front Jonathon Glynn caught more ball as a second-half replacement during the draw than he managed all Saturday evening, Niall Burke’s useful 1-2 scoring cameo was supplanted by a blank and most damagingly Joe Canning just couldn’t get into the game let alone galvanise his team, as had happened six days earlier.

Conor Cooney again showed well with an evening of flawless marksmanship and David Burke did better at centrefield but overall Anthony Cunningham’s side went backwards.

But it was Kilkenny who started the second half with four unanswered points from a Reid free, Aidan Fogarty, Pádraig Walsh and his brother Tommy.

Galway rallied with three points, two from Conor Cooney and Canning’s sole score of the match, a line ball, but they were finding attacking positions too hard to establish as Kilkenny’s defence pushed up on them and – Jackie Tyrrell in particular – broke up play and cleared ball.

Kilkenny showed their old characteristic of pouncing for goals at critical junctures. Aidan Fogarty followed up on a fine save by Colm Callanan from Pádraig Walsh to steer the ball back into the net and in injury-time Reid restored more representative margins to the scoreboard. The only negative for them was an early injury to goalkeeper Eoin Murphy. He suffered a hyper-extended elbow which will rule him out of Sunday’s Leinster final. David Herrity deputised.

Derby wins moves Atalanta to second in Serie A 08:53
Mikel Arteta warns Arsenal must invest significantly to compete 08:15
Frank Lampard: top four race will come down to ‘focus and attitude’ 08:04
Chelsea remain in third after Norwich win; GAA dressing rooms to remain closed 07:25
Jack Charlton era made GAA sit up and realise its greatest strength 07:00
Crossword Get access to over 6,000 interactive crosswords