Kilkenny aiming to put on a show for new Sky audience 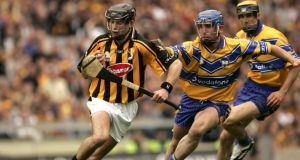 JJ Delaney: the multi-decorated and outstanding defender will man the full back berth for Kilkenny at Nowlan Park. Photo: Dara Mac Donaill

at the venue last year, the league final and All-Ireland qualifier against Tipperary.

Local support is expected to attend in reasonable numbers, partly for the novelty of the new broadcasters but also because Kilkenny don’t get many home championship fixtures.

On the field Kilkenny are missing Henry Shefflin and Richie Power but have Michael Fennelly, which they didn’t in last year’s fixture. Fennelly can be such a dynamic presence and showed in last year’s league final his capacity to take scores if he’s not bottled up.

Derek Morkan will need to be supplemented in the task – physically if not in terms of hurling – but Offaly have been trying a sweeper system in the league and will look to create congestion.

Alarm bells rang for Kilkenny in this fixture last year in Tullamore, not because they ever looked like losing but because they conceded four goals – two of them to create some momentum at the start and the other two basically to keep the deficit down in the second half.

Brian Cody has changed the defence quite radically, leaving mainstays like Tommy Walsh and Brian Hogan on the bench and naming Walsh’s brother Pádraig in his place and Cillian Buckley on the other flank.

Both have done well in these positions so far this season but it will be the experienced Jackie Tyrrell’s first championship start at centre back – for all that his club form has at times claimed him to be the best in the position in the county. His physicality will be useful against Dan Currams.

Kilkenny’s defence will need to be vigilant given that there are goals in the Offaly attack: Currams, Joe Bergin and Shane Dooley all carry that threat but manager Brian Whelahan will hope to get rounded performances from all three. Bergin got two goals whereas Dooley didn’t score from play.

On paper this should be a bit of a riot but two years of defeat in Leinster has diminished the raw fear that used to afflict Kilkenny’s opponents and whereas the home team are clearly too strong, this mightn’t turn into the anticipated coursing meeting some expect.